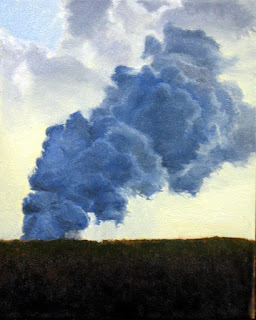 Here is another new painting just underway - another image from Hawaii. I went last fall and got to see some of the volcano’s activity. It began gushing steam and gas about a year ago – representing the first eruption since 1982. In the fall some people saw flames coming from the vent and geologists have found lava rocks thrown up onto the crater floor.

Unlike the Fumerole coming directly from the vent, this is a steam plume caused when lava flows over land and through lava tunnels to eventually exit into the ocean. The plume contains a mixture of hydrochloric acid and concentrated seawater that is created when lava reacts with seawater. This mixture is known as laze (lava haze).
at June 09, 2009

This is really nice, the feed image looks like a photo (in a good way) I like the warn tones in the sky.

Thank you everyone - it's been fun to work on this one.

Melissa - I knew what you meant, but I think warn ones is totally appropriate! That could be a title.

Wow - this is really powerful. I get totally pulled into the column of ash/smoke. I also really like the contrast between the dark lower part of the canvas and then the light, beautiful sky with that ominous billow. An unusual subject beautifully done. Can't wait to see the final product.

Gabrielle, Thank you. It's wonderful to know why something is working for someone. Thanks for visiting!

Thank you Marianne and Magdalena.