I have one new painting included in this group exhibition at TAG Gallery's new location at the Bergamot Station Art Center in Building D-3. The exhibit runs from January 5th through the 30th. The opening reception of Best of TAG 2010 and book signing of 100 Artists of the West Coast II

is Saturday, January 9th from 5 - 8pm. So bring your books if you'd like to have them signed, or just bring yourself and enjoy the artwork. I hope to see you there!

Email ThisBlogThis!Share to TwitterShare to FacebookShare to Pinterest
Labels: Books, My Work on Exhibit 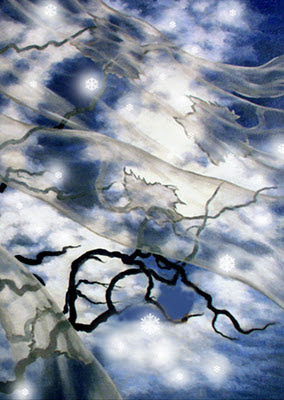 Wishing everyone peace and joy for the holidays and the New Year!
at December 25, 2009 1 comment:

"An artist must paint not what he sees in nature, but what is there. To do so, he must invent symbols, which, if properly used, make his work seem even more real than what is in front of him." Charles Burchfield

The exhibit Heat Waves in a Swamp, currently at the Hammer is the largest collection of Burchfield’s work I’ve ever seen together all in one place.

Like Christmastime the trees are alight. There’s as much going on in the spaces between things; dry brushstrokes, transparent patterns overlapping, and lifting of color used all together to ecstatically animate his subjects, portraying mood and feeling as much as form.

Having not realized Burchfield’s technique of piecing smaller pieces together to make larger works I’ve always visualized them as being smaller, no larger than about 40 x 30”. Many of his paintings are much larger than that. Burchfield had a revelation when he reached his 50’s of revisiting his earlier works and using them as the inspiration and the starting points for his later work and then building on them by adding pieces to the sides, top, and bottom. Details of his process are revealed in the video below.

He made many drawings and took copious notes while figuring out how a painting should come together. Samples of these drawings and the extensive notes are part of this exhibit. Also displayed are numerous doodles, a few samples of his wallpaper work, and many journals. The selections from his journals printed beside various paintings are priceless. In one he describes in great detail everything he’s seeing in a cloudy sky, ultimately saying that it is agonizing to watch, while in another he states that there is too much grandeur in a dandelion seed head to take in.

Email ThisBlogThis!Share to TwitterShare to FacebookShare to Pinterest
Labels: Artists I Admire

100 Artists of the West Coast II 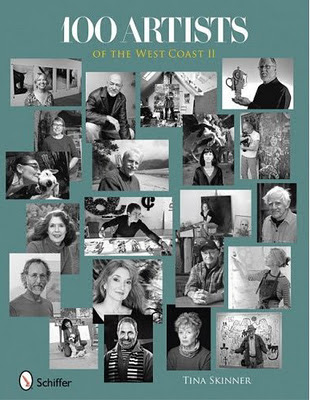 I'm pleased to announce that a book that includes my artwork has recently been published. From San Diego to Vancouver, 100 Artists of the West Coast II

covers 100 artists with over 400 full color photographs of their work. The collection includes art from private as well as public collections and installations, including the collections of the Los Angeles County Museum of Art, the San Francisco Museum of Modern Art, the Art Institute of Chicago, the Museum of Modern Art New York, and the New York Public Library to name just a few. I'm happy to be included.
at December 10, 2009 8 comments:

Email ThisBlogThis!Share to TwitterShare to FacebookShare to Pinterest
Labels: Books

I had so much fun seeing familiar and new faces at TAG's opening Saturday night. The new gallery space looks great. Plus, I feel that I got wonderful feedback on the piece I exhibited (above). A thank you to everyone who came by!
This exhibit runs through December 26th, at TAG Gallery, Bergamot Station D3, 2525 Michigan Avenue, Santa Monica, CA 90404. The hours are Tuesday through Saturday 11am - 5pm.
at December 07, 2009 7 comments:


I'm prepping work and updating my portfolio this week. Saturday is TAG's official opening day at the new location and I'll have one small piece as part of a group exhibit that opens December 5th and runs through December 26th.

I went by on Tuesday - which was move in day. The movers happened to have an irresistably adorable little puppy with them that someone had given one of them that morning while they were on the way to our location. Luckily someone had some spare dog supplies in her car and a box with a blanket was prepared. The puppy slept through the morning in her box, but later when she woke up I ran out and got some puppy food. Feeding her and taking her for a little walk was a fun distraction from moving.

When I left the painters were already making good progress even as furniture and office supplies were being moved in. It looks like everything will be all set for the opening on Saturday.