Back From Big Sur 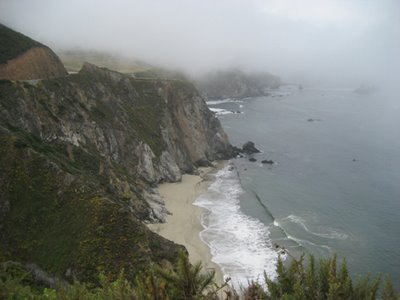 I just got back from a trip up the coast to Big Sur. I attended one of Linda's workshops, stayed at the Big Sur Lodge, met some really cool people, and explored areas of the Point Lobos State Reserve in great detail. I can barely describe how beautiful it was. The weather was outstanding-cool and foggy most of the time. The day I left Los Angeles it was hot and humid, which is an unusual combination for these parts. As I was packing I was unable to make the mental adjustment for a different climate, other than to include a jacket and one t-shirt with sleeves, short sleeves. Everything else I brought was thin and strappy. Even so the change was welcome and refreshing.
at June 29, 2006 2 comments:

Bring Out Your Inner Jackson Pollock...

... at least the creative part of your inner Pollock. Click here.

My dog, Bear, likes very much to watch TV. Whenever another dog appears on the screen he growls a warning and if it doesn't vanish right away he starts barking at it. Over the years he has extended this treatment to include cats, birds, horses, cows, goats, indeed any animal. It doesn't matter if it is a movie, a TV show, or a commercial. He also growls and barks at animated cartoons of animals, and it doesn't seem to matter if the animation is well done. Recently there was a movie with a scene of a boy making shadow puppets. Sure enough Bear's ears perked up and as soon as the shadow made a representation of a howling wolf the barking began.
at June 20, 2006 5 comments:

Email ThisBlogThis!Share to TwitterShare to FacebookShare to Pinterest
Labels: Pets and other animals 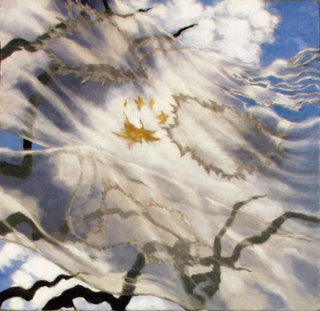 I wanted to continue exploring this theme. This variation of Autumn's Veil is smaller and a lot more detailed.
at June 16, 2006 2 comments:

The free link from Google no longer works. It is still possible, if interested, to watch it online, for a fee, it's only $4.95. Here is the link for that: whatisthesecret.tv.
at June 14, 2006 No comments:

I didn't realize that there were videos on Google to watch until someone sent this link. Take a look; this one condenses a lot of learning into one movie:
The Secret of Conscious Creation. It's a good introduction to anyone unfamiliar with the law of attraction.
at June 11, 2006 5 comments:

If there is such a time as Glow Worm season it must be now. While hiking last night we spotted two little lights just off the trail under some bushes and everyone stopped to look. Then we realized that there were two more about a foot away. Someone said they looked like a discarded cell phone. Further down the trail there were a few more scattered about and then a little further on an entire constellation of them shining in the dark. I am very familiar with fireflys, also known as lightning bugs, from childhood summers in the midwest, but these glow worms are new to me. Fireflys blink on and off, but the glow worms simply turn on and then stay that way.
at June 02, 2006 1 comment: