Looking up and down the aisles at all the booths this image caught my eye. From a distance I thought this might be an abstracted flower. Close up I realized it's a book. 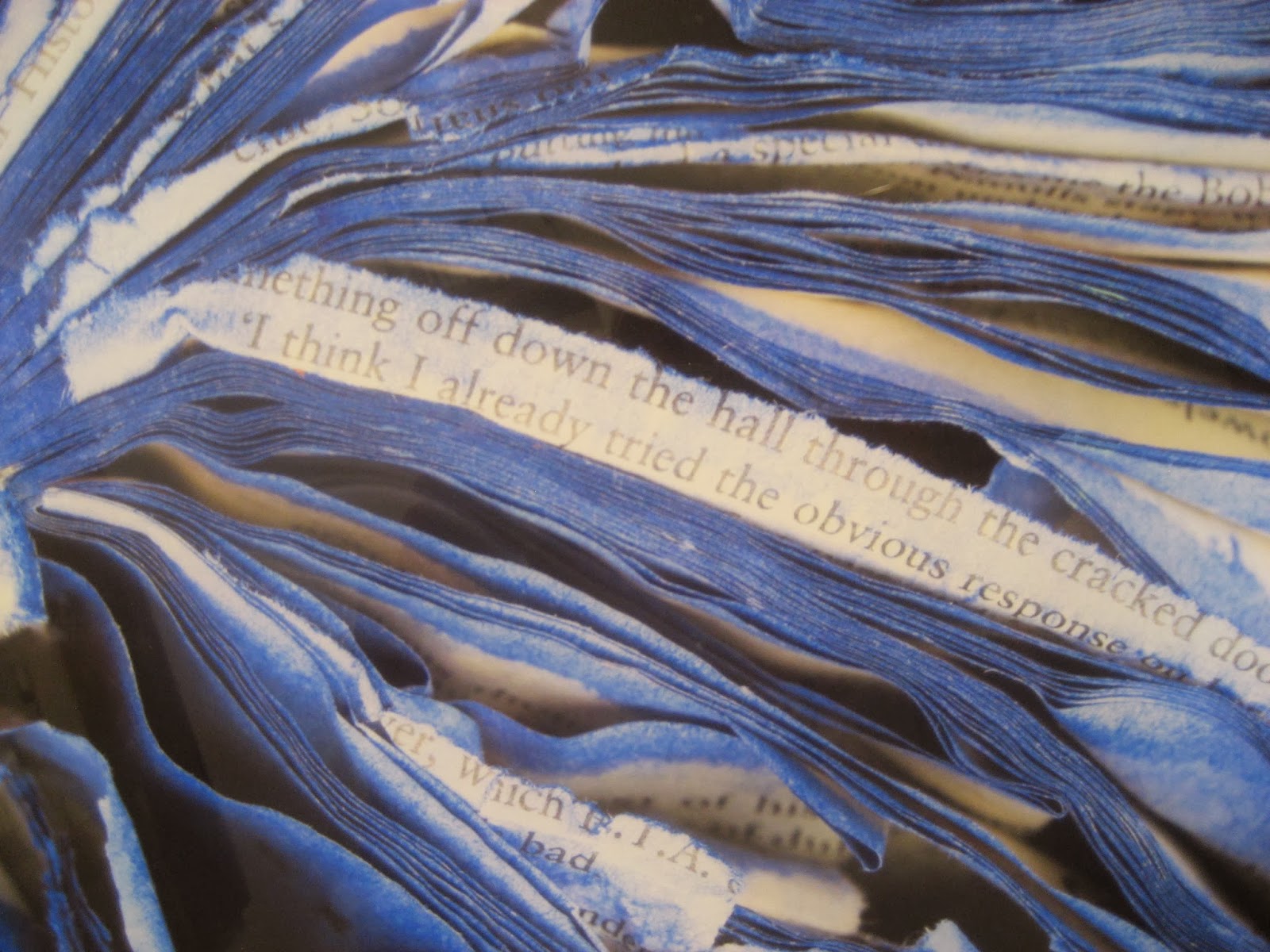 Can you read it? I think it says, "something off down the hall through the cracked door" and then, "I think I already tried the obvious response".  Could it be Infinite Jest, by David Foster Wallace? 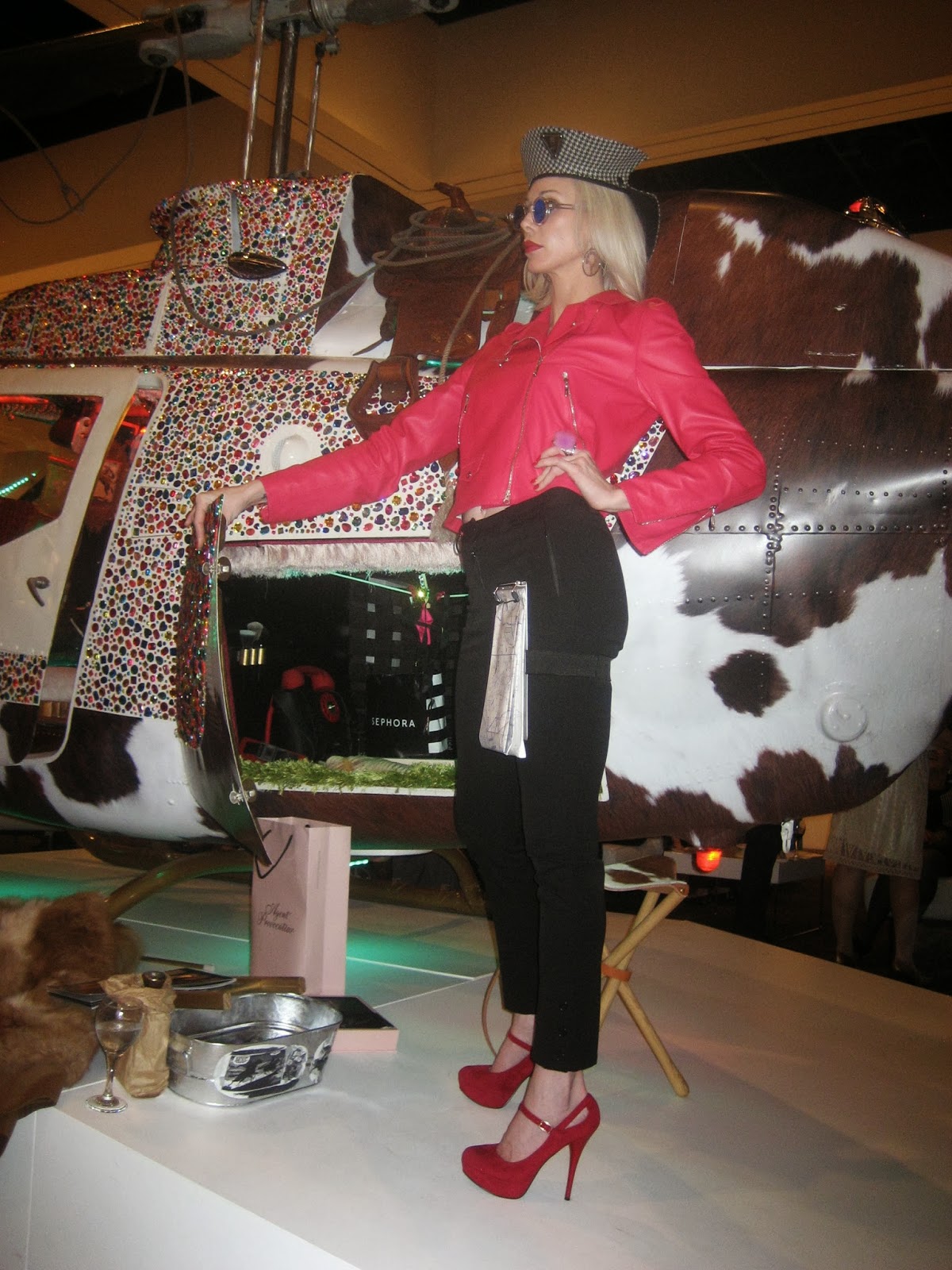 Above, that's not a sculpture, it's an actual person. This helicopter installation, called Ride-em-Copter by California Artist Steve Maloney, quiet through most of the weekend, made one or two, odd and yet loud, trumpeting blasts on the last day. Someone quipped, "Something must have sold!" 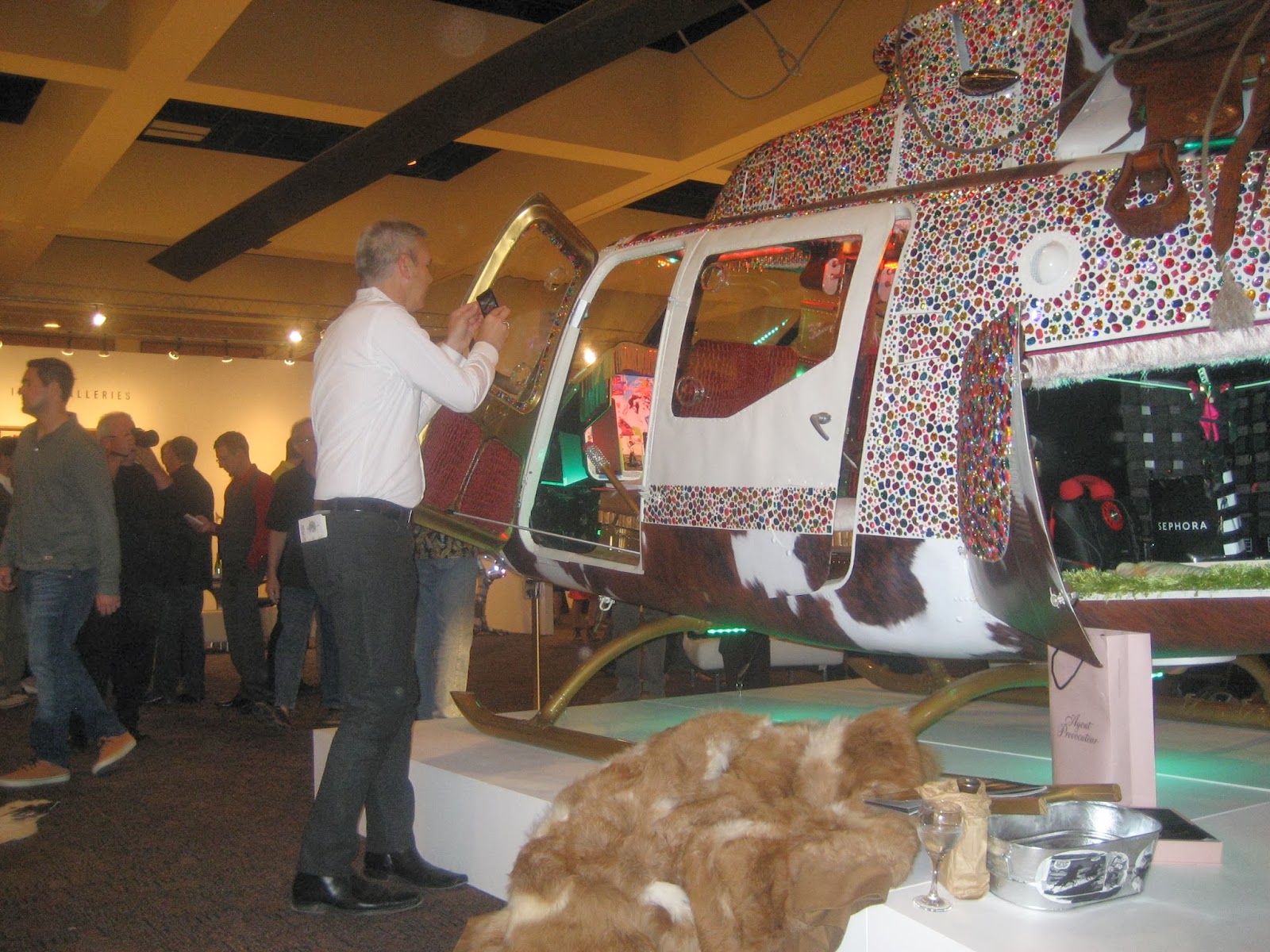 Many dogs came by. I thought this one matched Susie McKay Krieser's outfit, so I took their picture. She is a therapy dog and her name is Kaper. 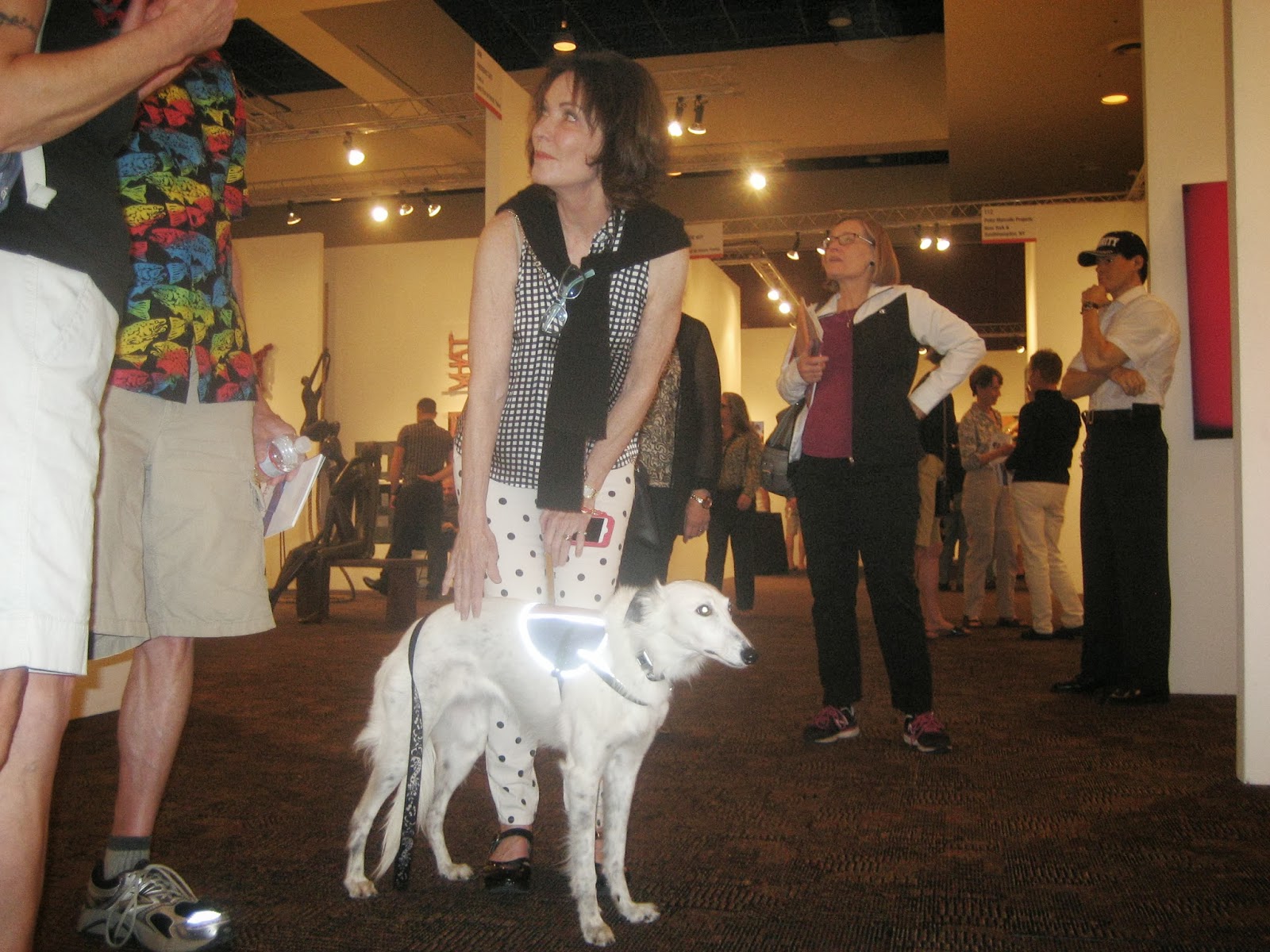 In case you're wondering, she's a long haired whippet. 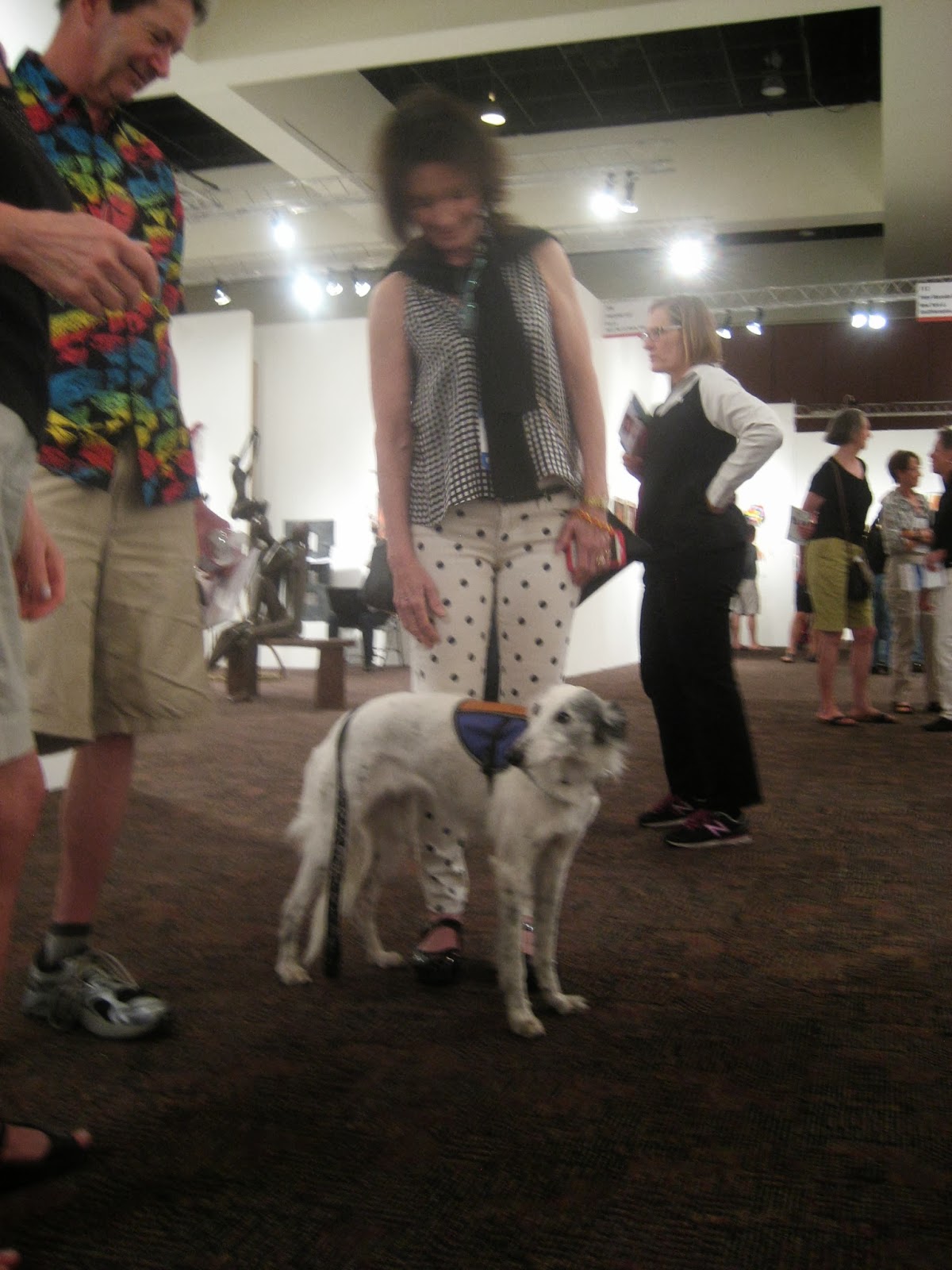 Susie returned the favor and managed to take a shot with both of us looking at the camera. 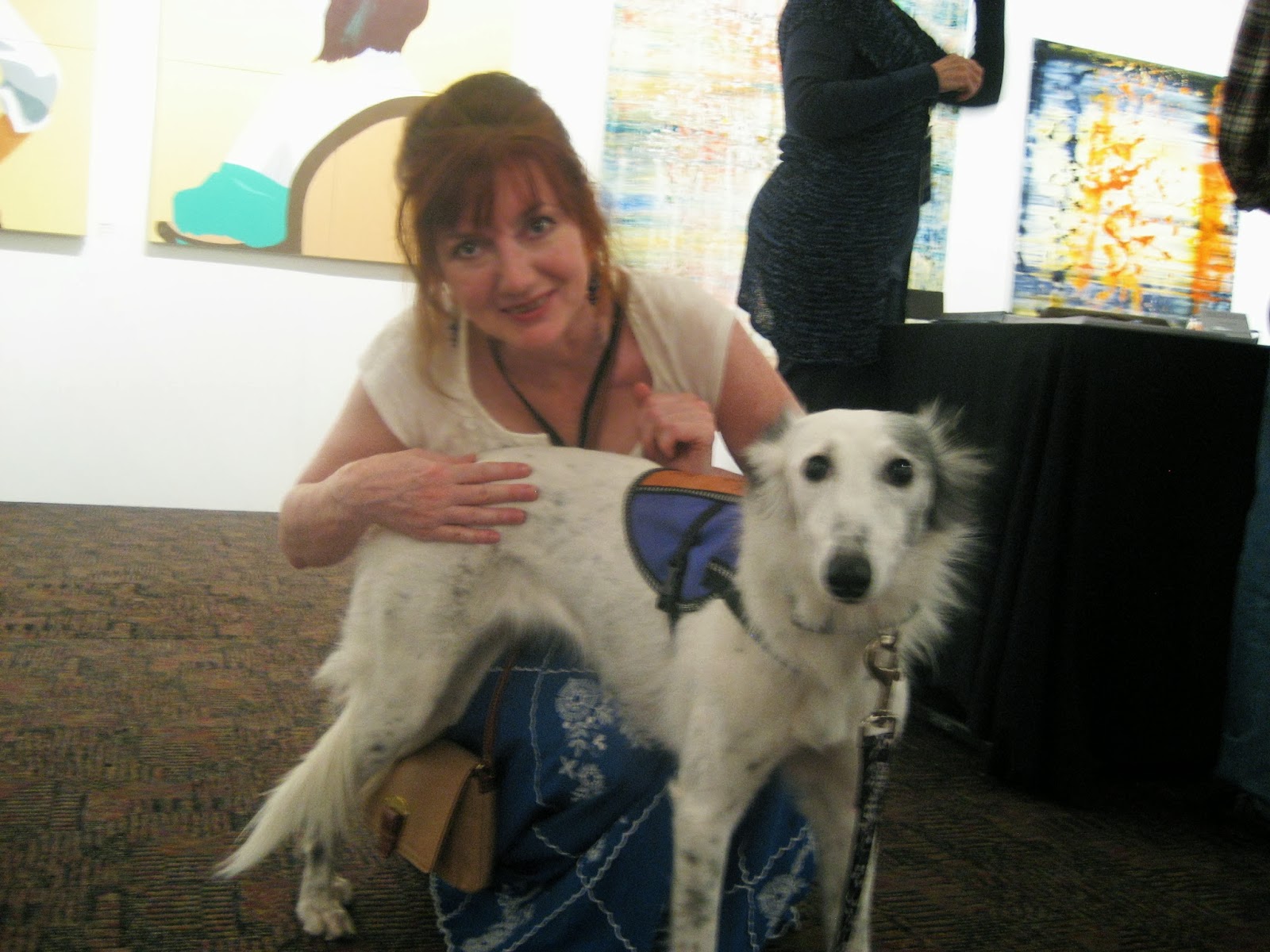 I took some time out to run over to the Palm Springs Art Museum and see the Diebenkorn exhibition. It was a nice perk they gave that allowed me to flash my exhibitor's pass and get in free. I thought it might be quieter there than the fair, and it was, but it was almost as crowded, which is to be expected on the last weekend of such a stellar exhibition.

Back at the Fair it was wonderful to visit with friends that came by, including Kathryn Hansen. Her boyfriend took one of my favorite photos - you can see it on Kathryn's blog here.


And then, it's a wrap! Within an hour of the closing time, most of the walls were bare and much of it already loaded up and on the way out of town. 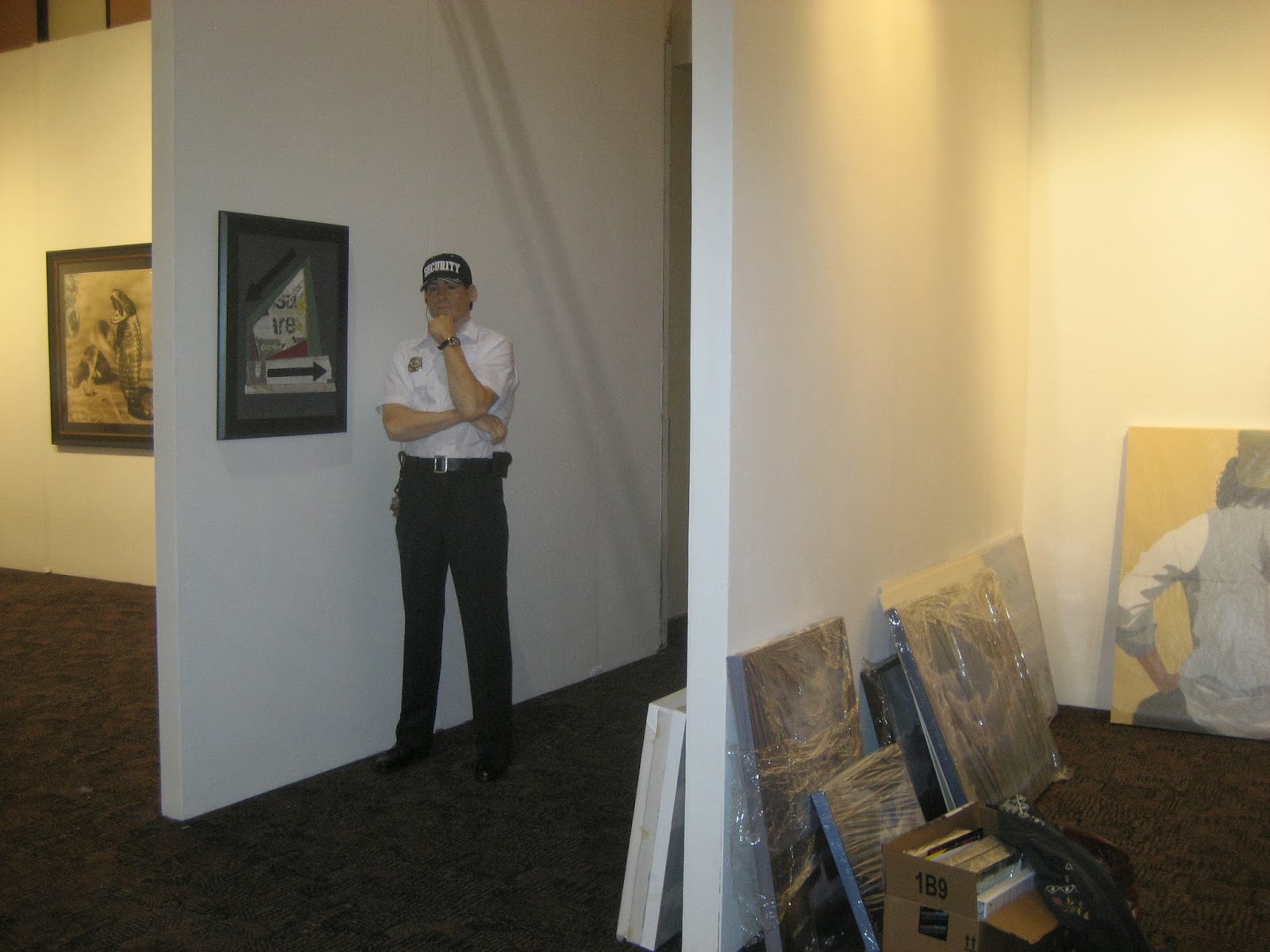 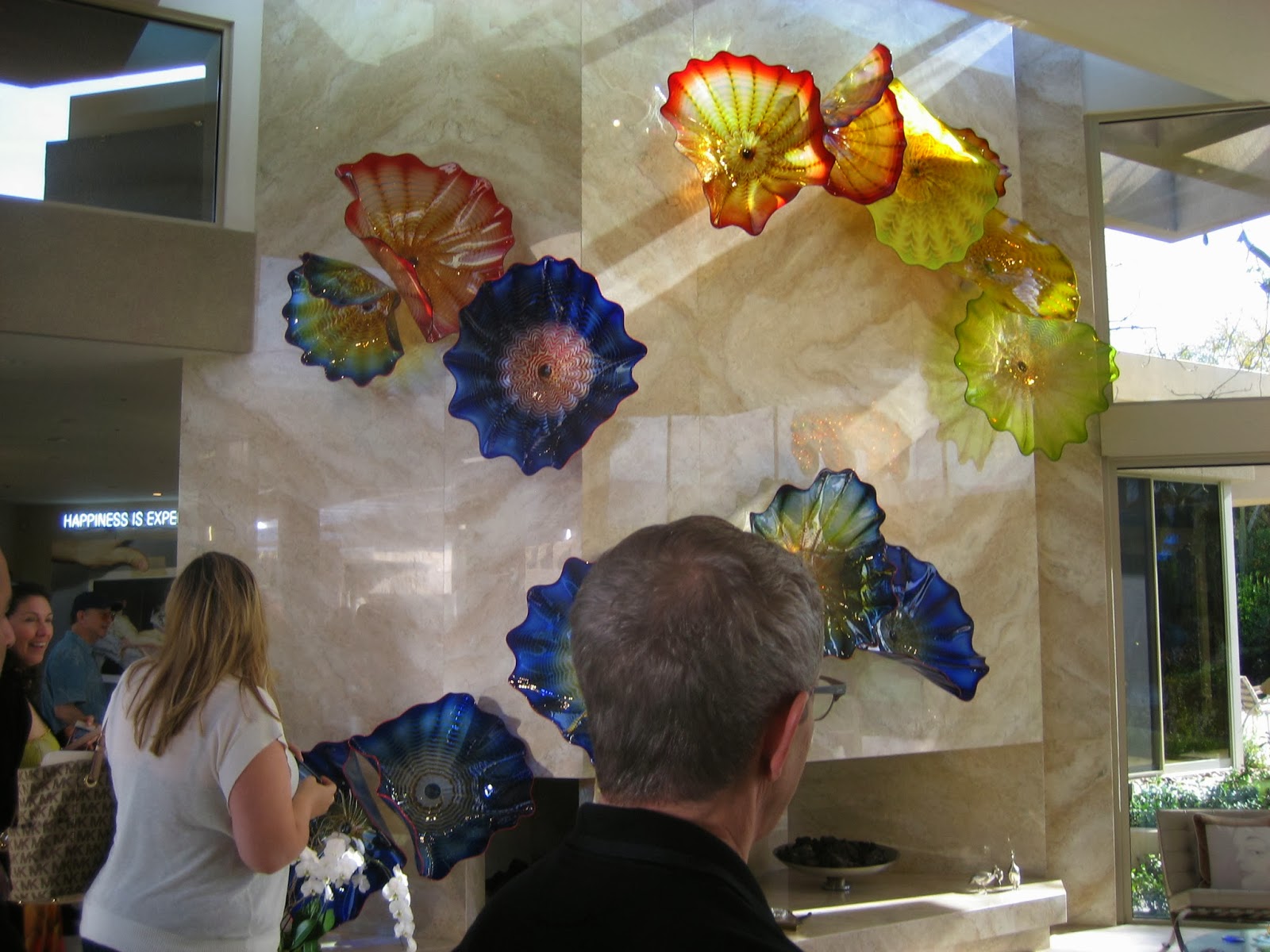 The day after delivery and installation of the artwork we were treated to home tours, visiting the homes to see the collections of Donna MacMillan and Justin Baldwin. 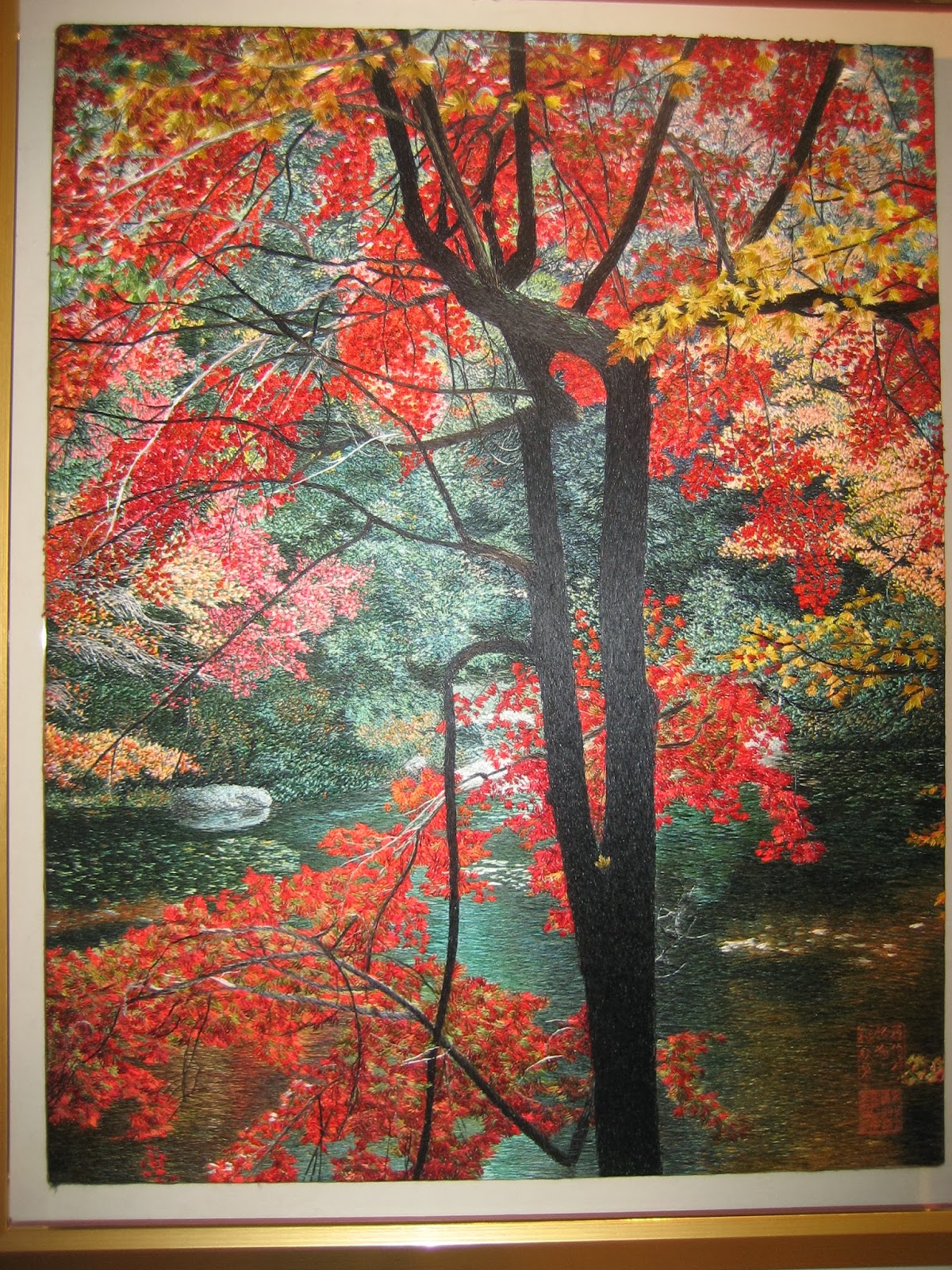 If I had to summarize the collection of art at the MacMillan residence with two words I'd say it was whimsical and full of light. 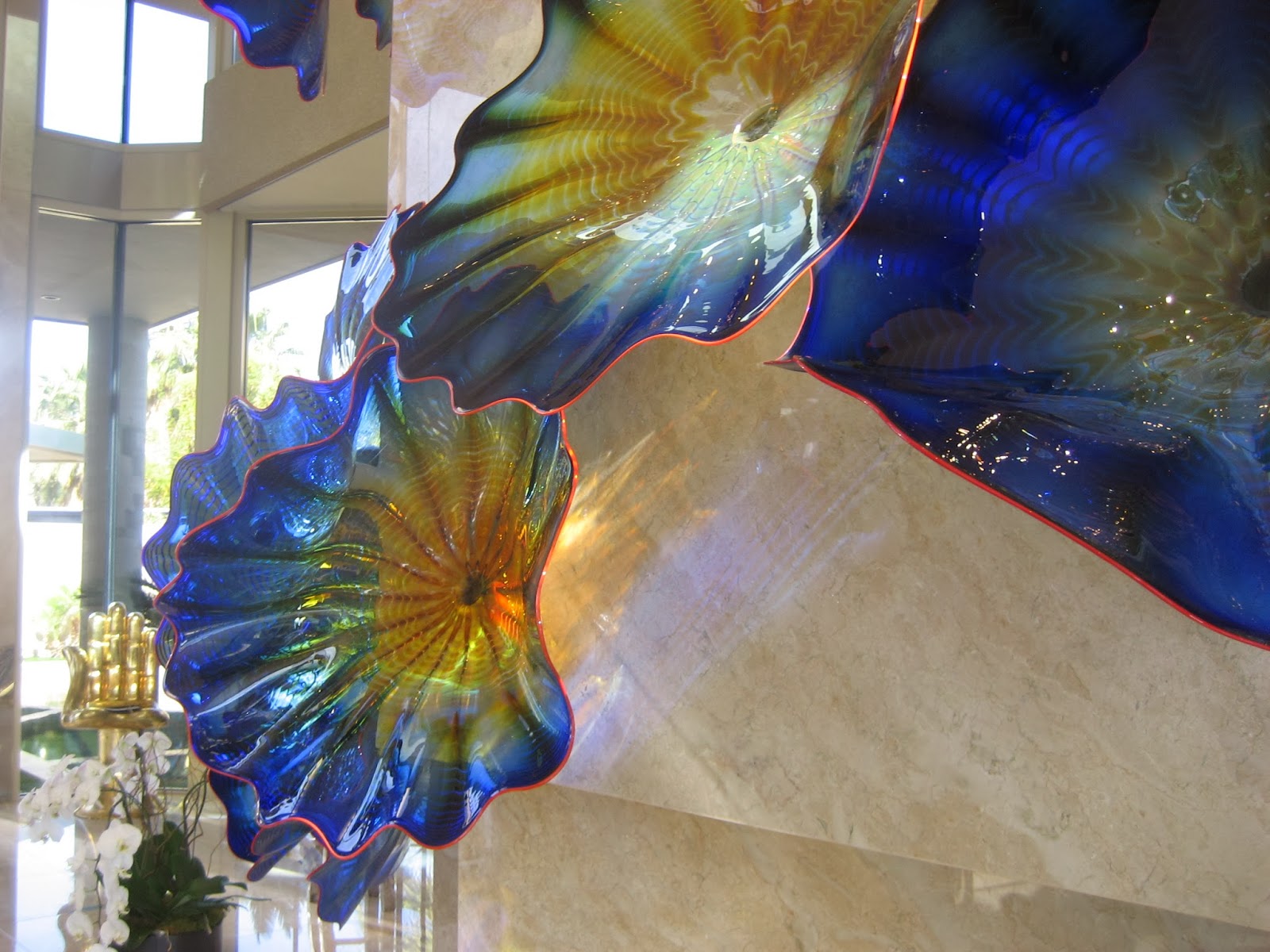 The house contained the largest collection of Dale Chihuly glass work I've ever seen together at one time. 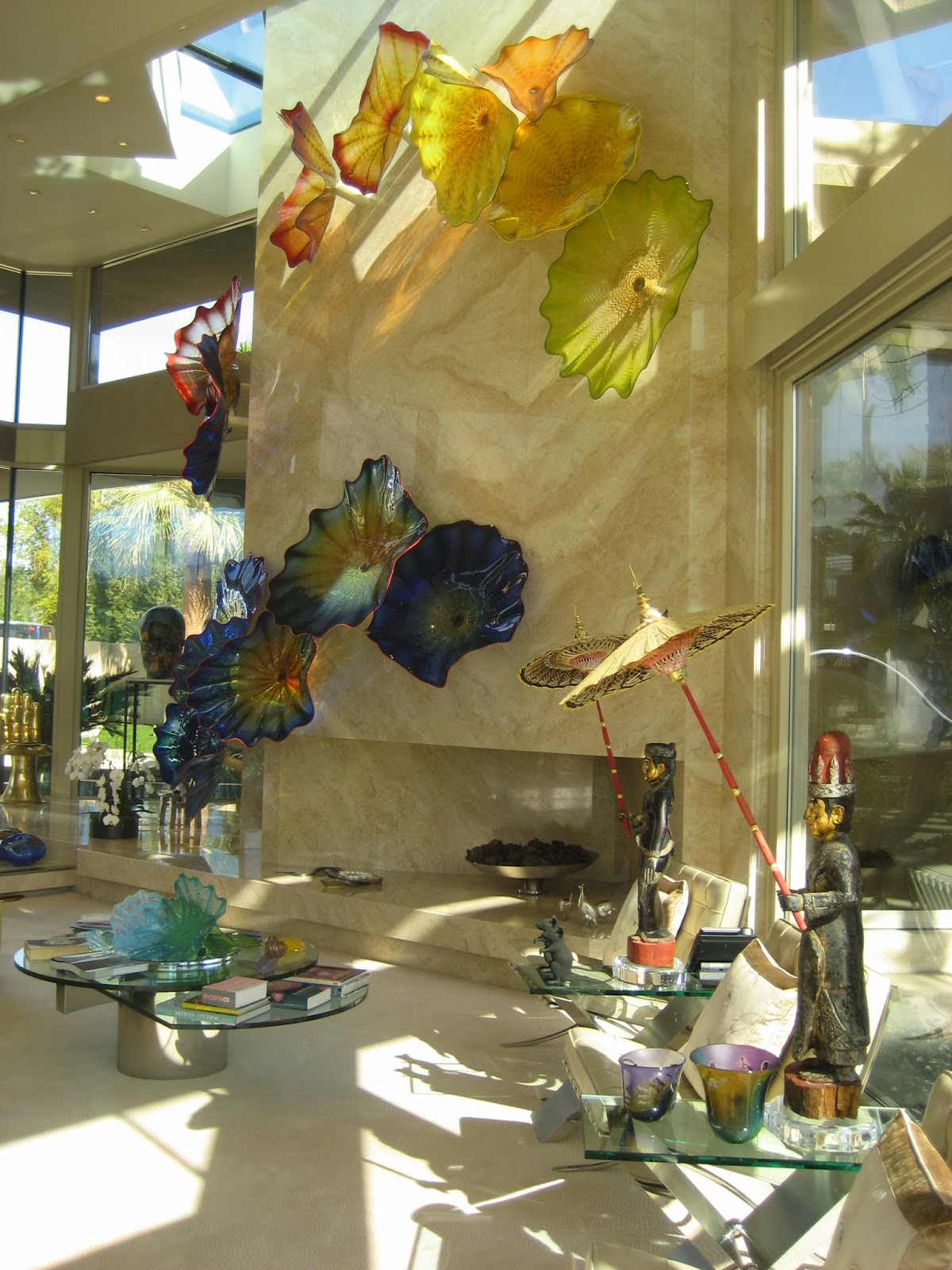 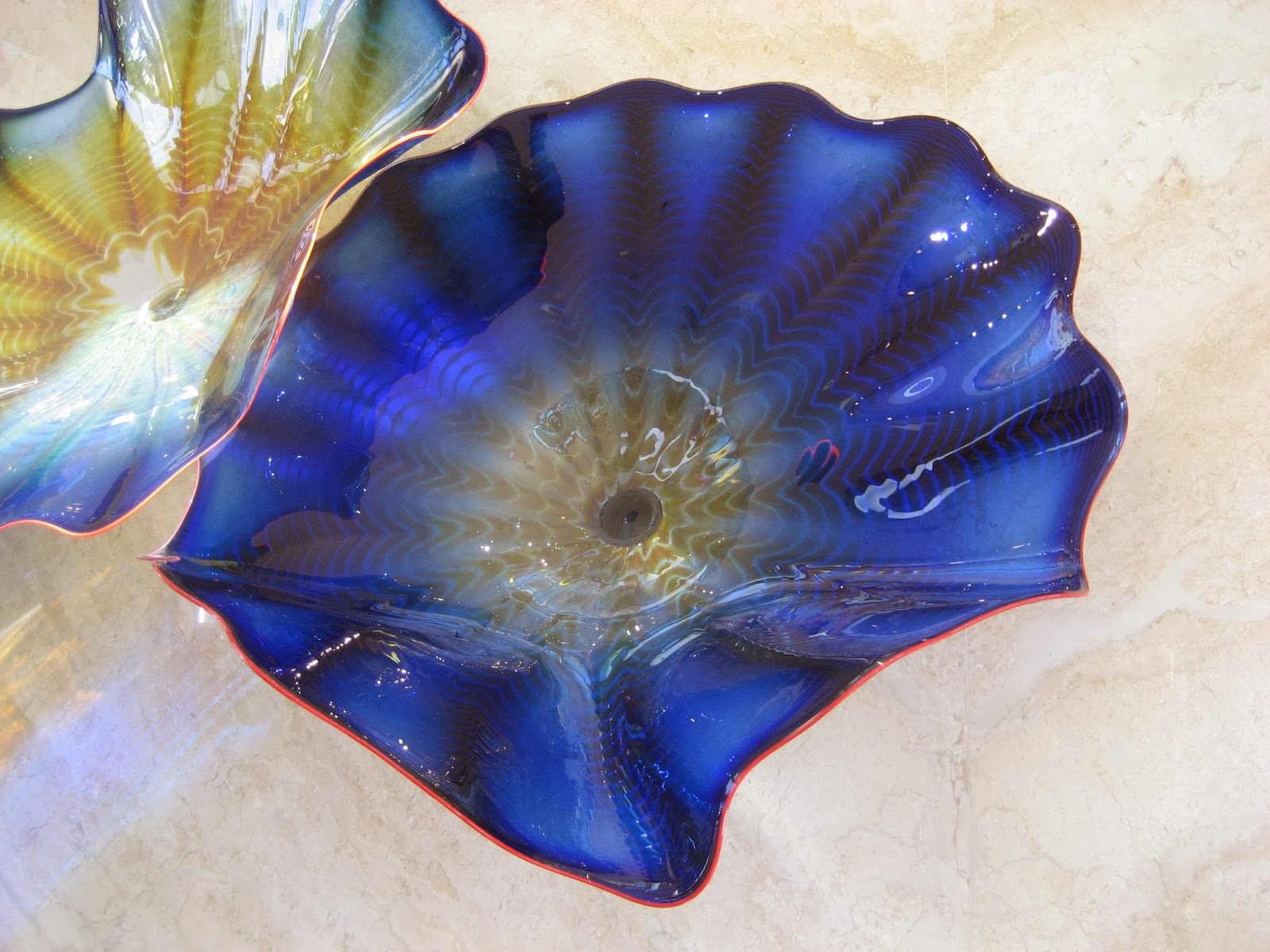 Everywhere I looked there was something witty or intriguing. 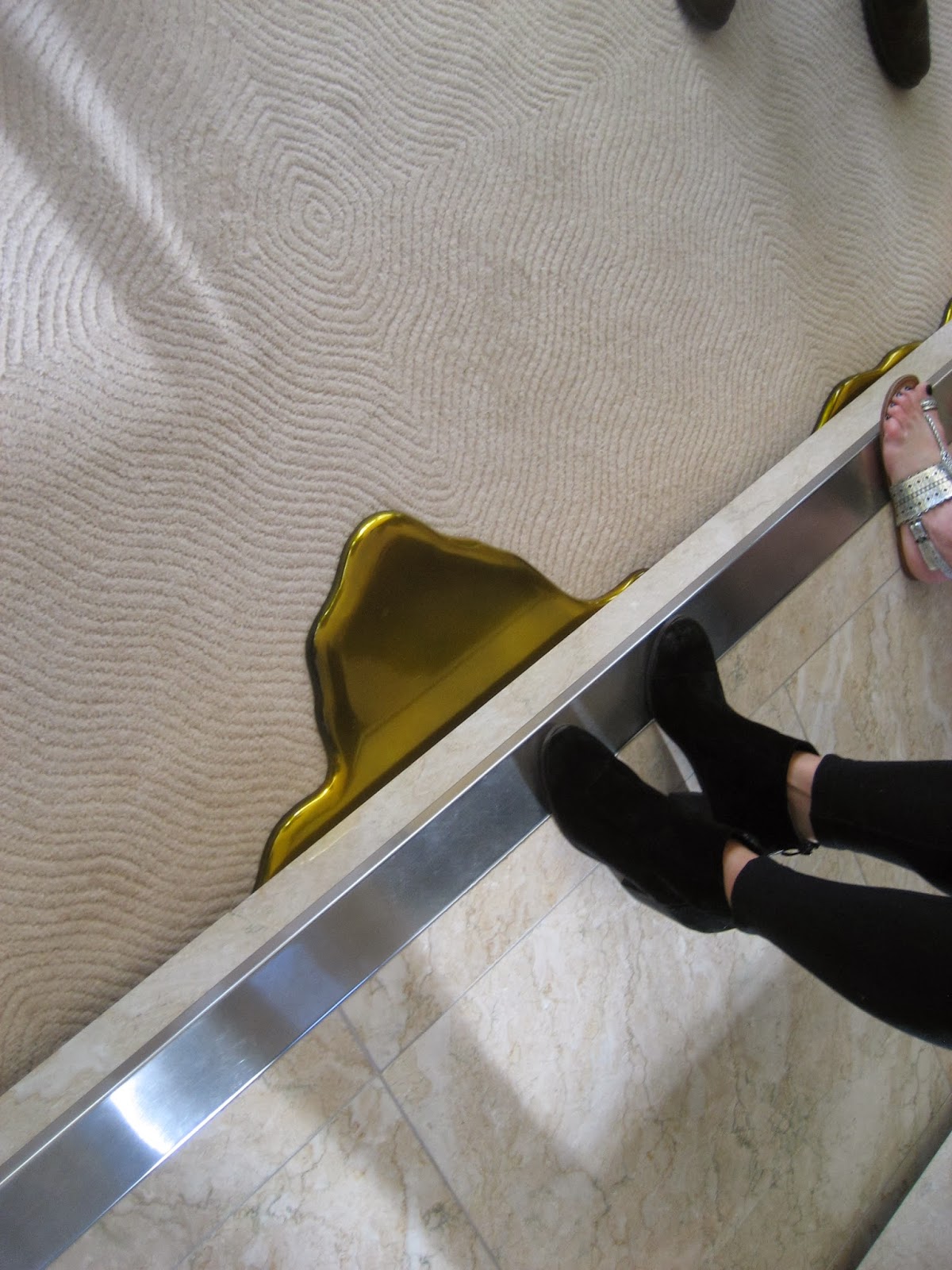 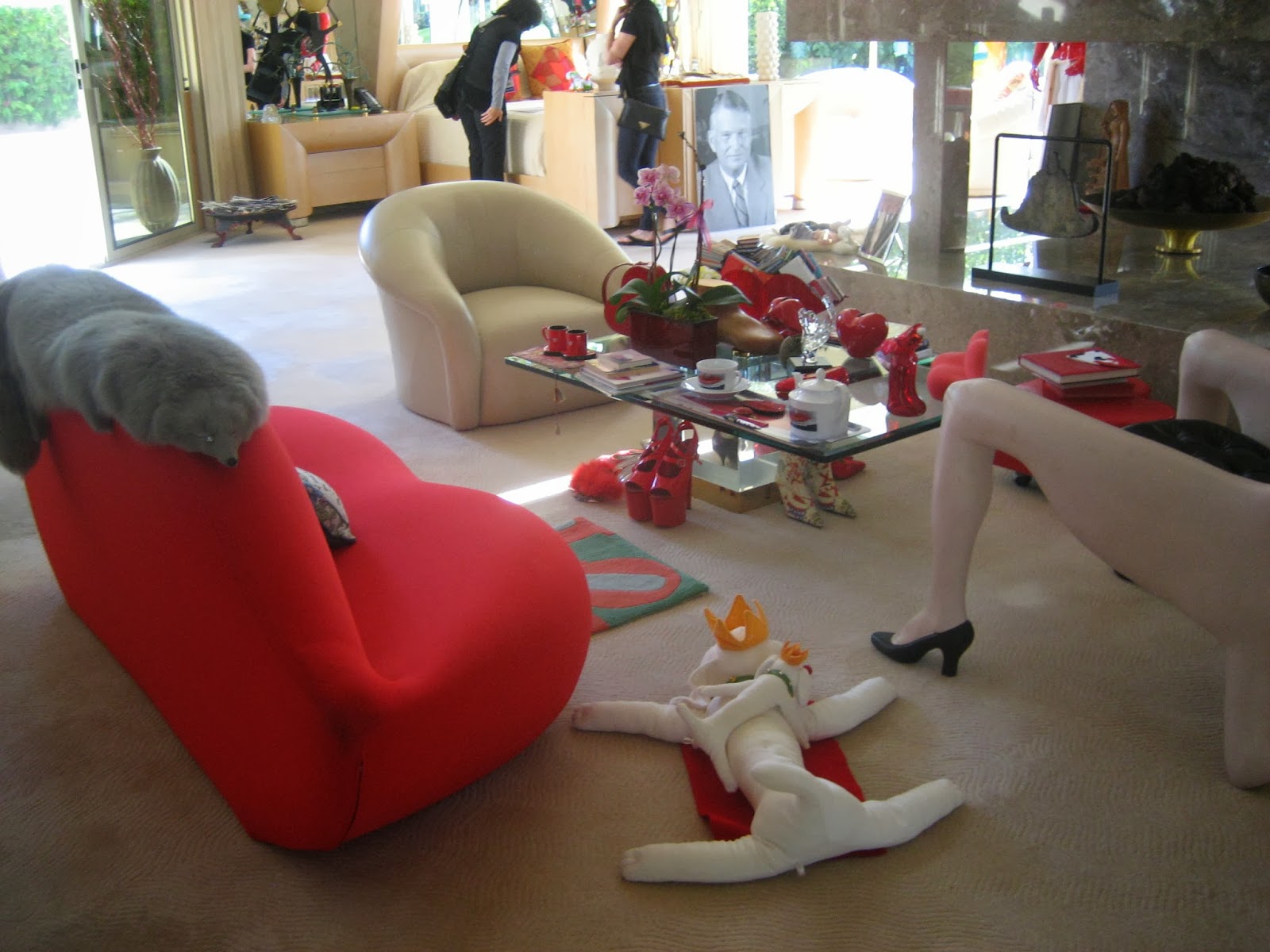 The home of Justin Baldwin also filled to the brim with art, had a different feeling. Much of the interior felt solid and grounded, balanced by the airy and spacious views. 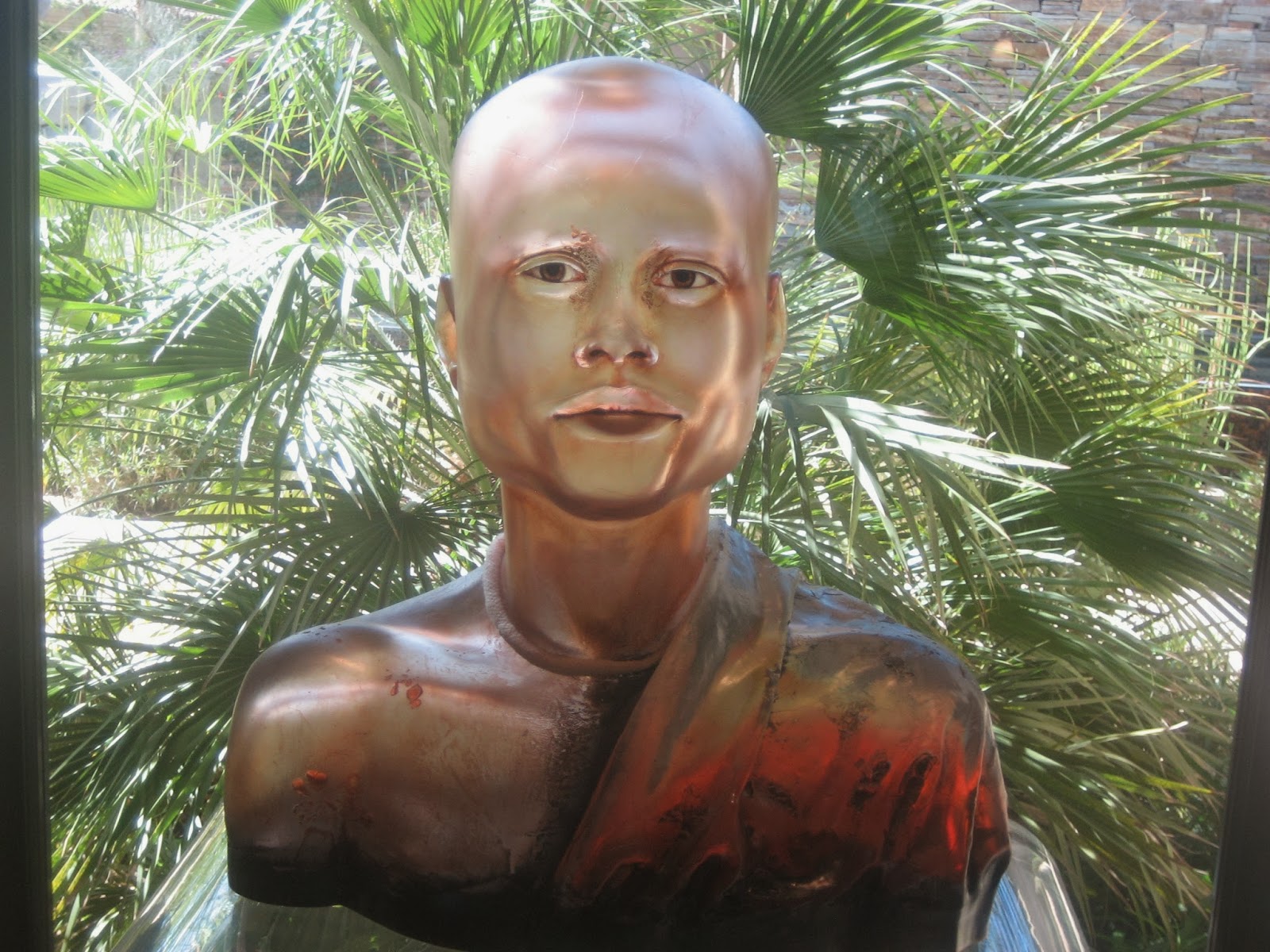 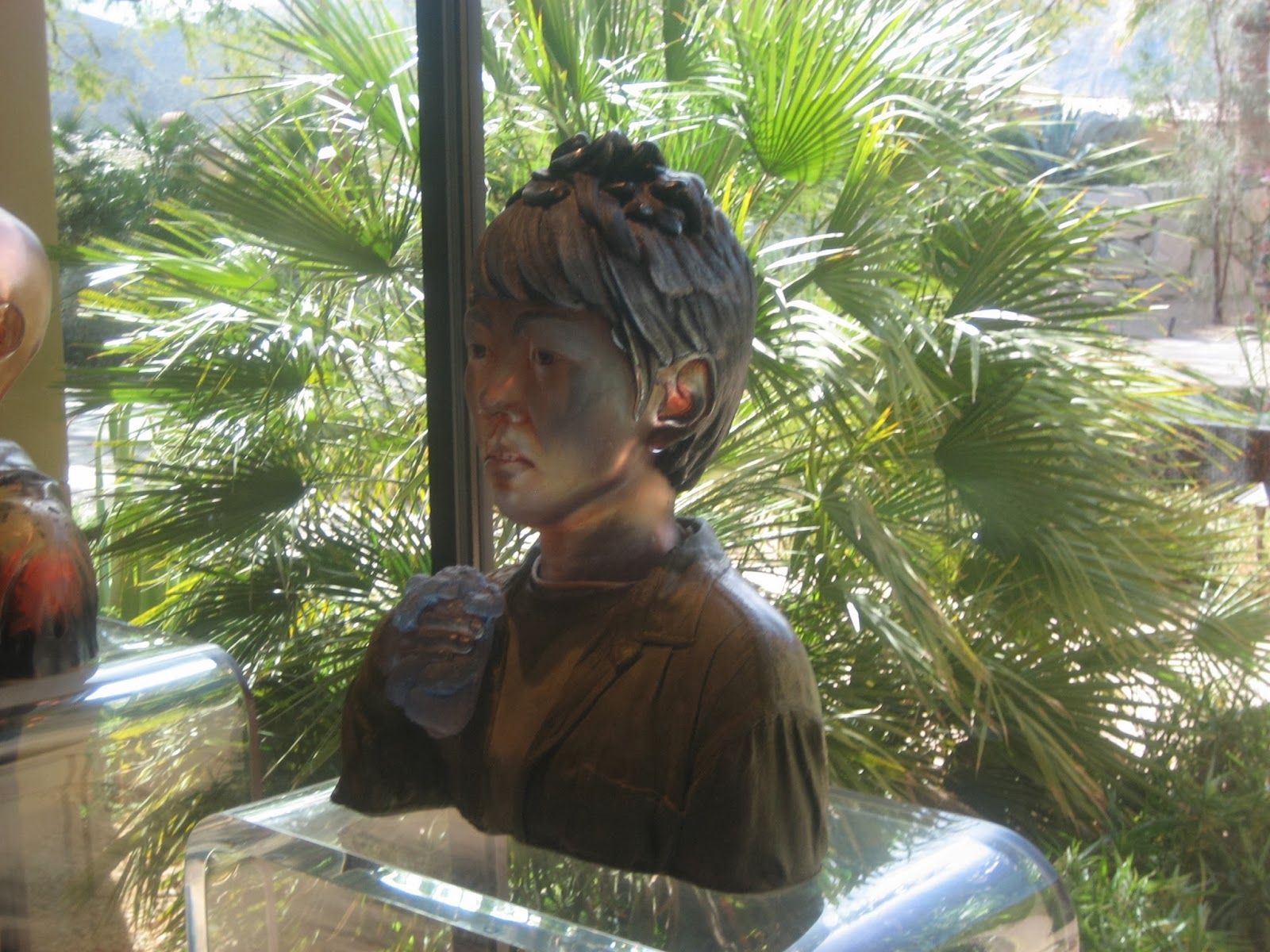 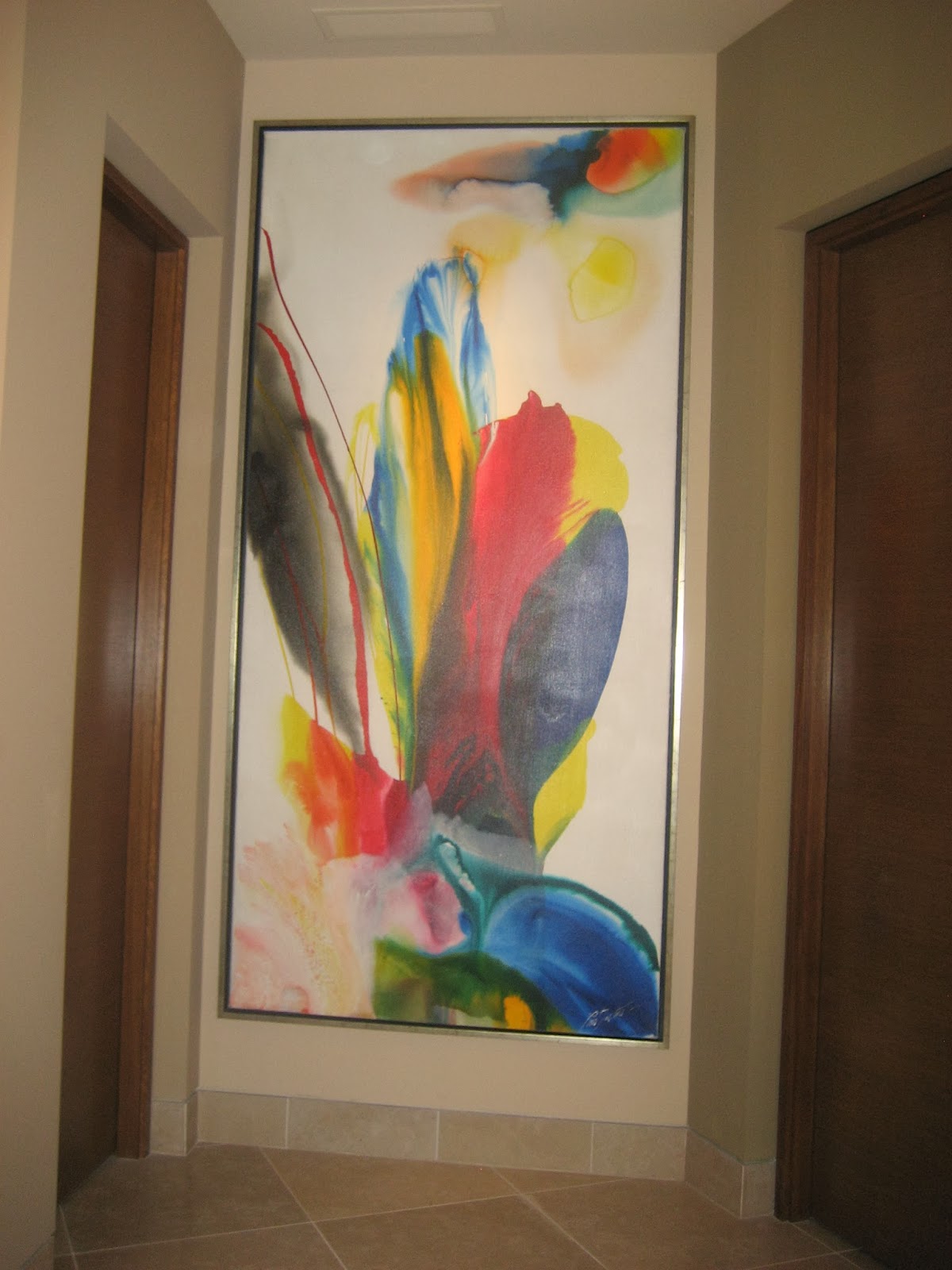 The view from the back can be seen through floor to ceiling windows. Sculptures reflect on each side of the pool. 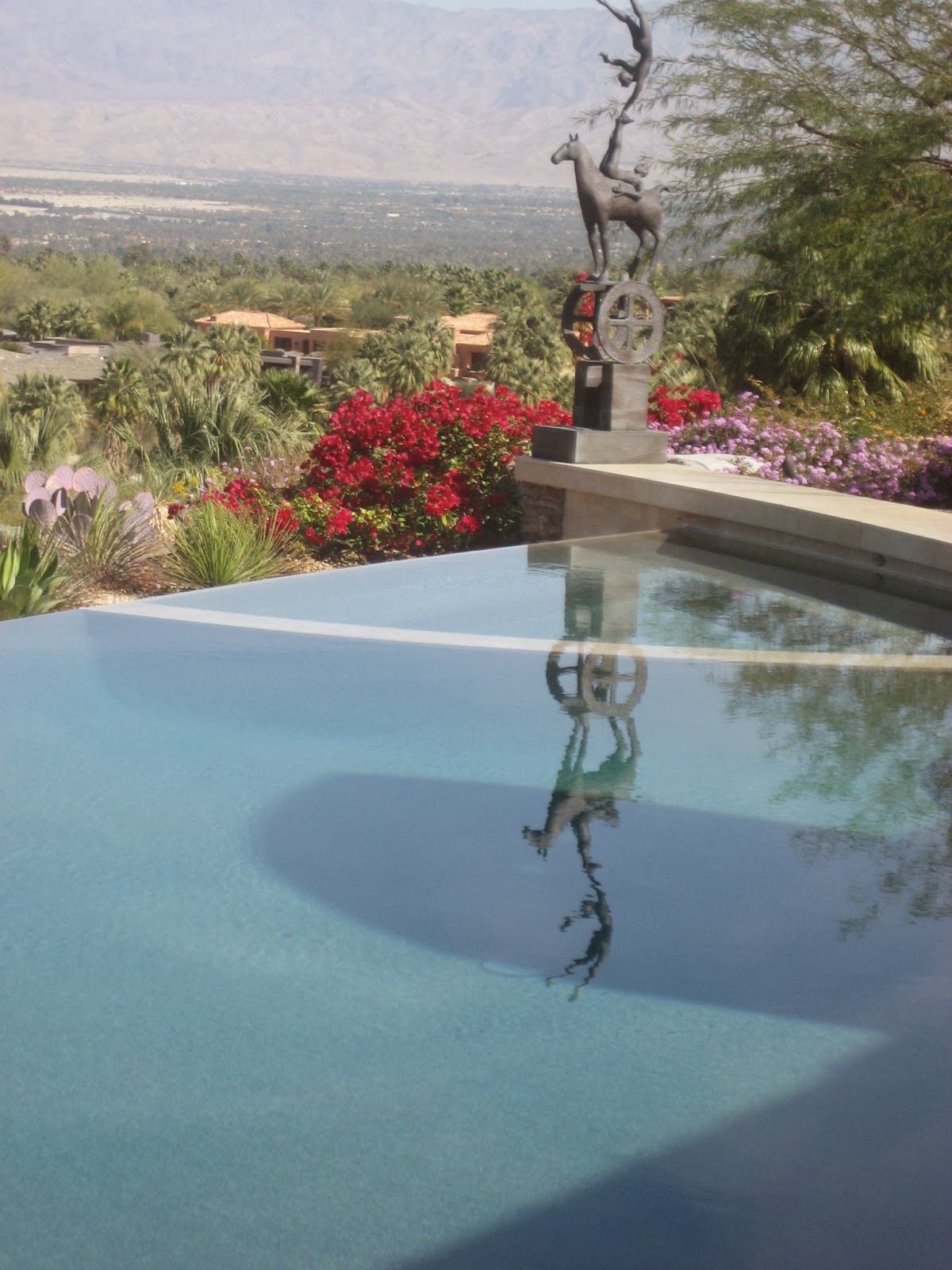 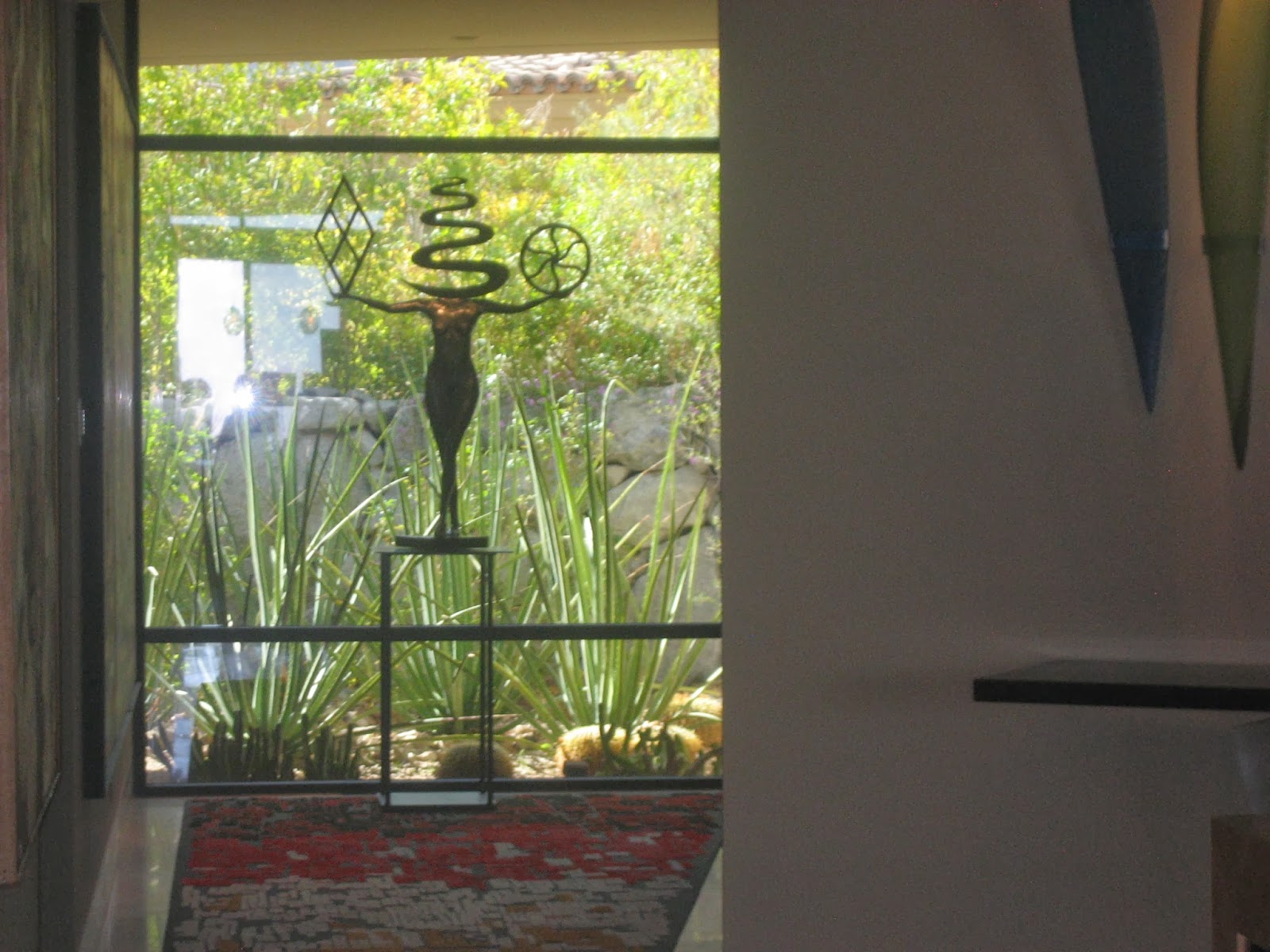 This past weekend was the 2014 Palm Springs Fine Art Fair and below are images of some of the fun as it unfolded.

Wednesday's hustle and bustle below, as artwork is arriving and finding it's place along the walls. This view is looking across the aisle at Gerald Peters Gallery (Santa Fe). Some pieces are already up, the Cynthia Corbett Gallery (London) next door unpacking, the Chopper in the center still wrapped and veiled. 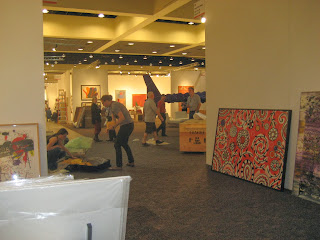 The helpful art fair staff coming with a ladder for some last minute lighting adjustments. 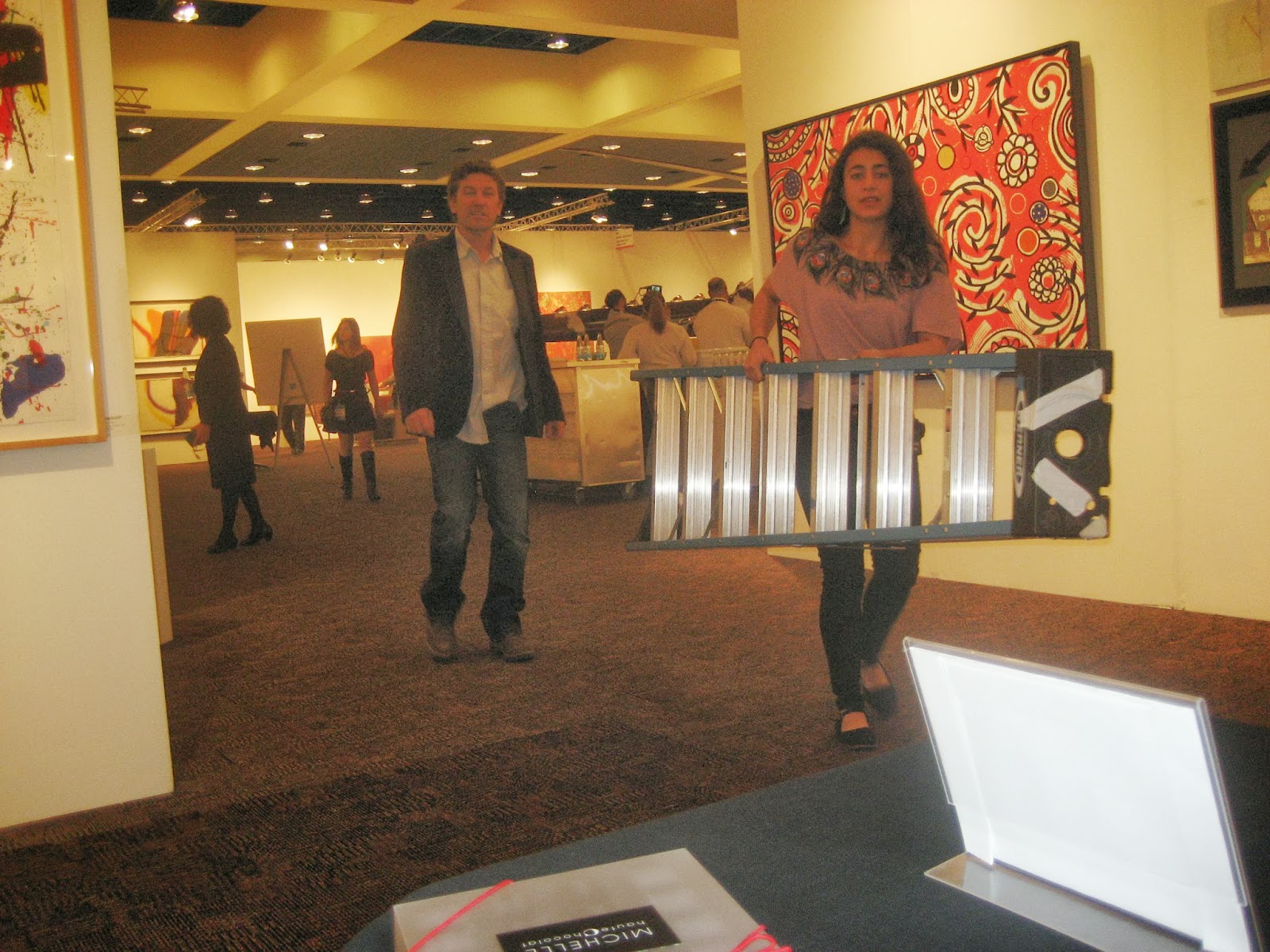 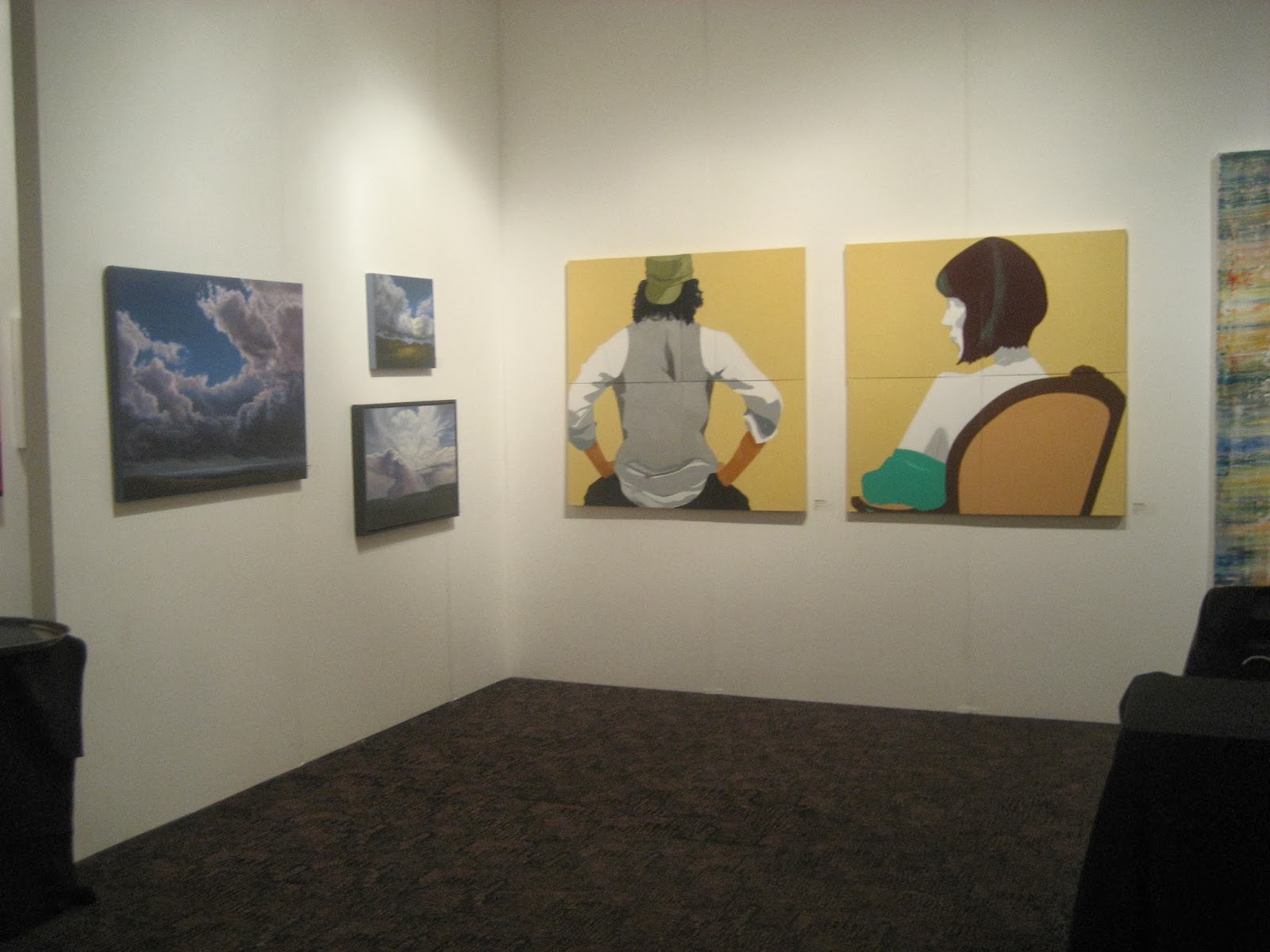 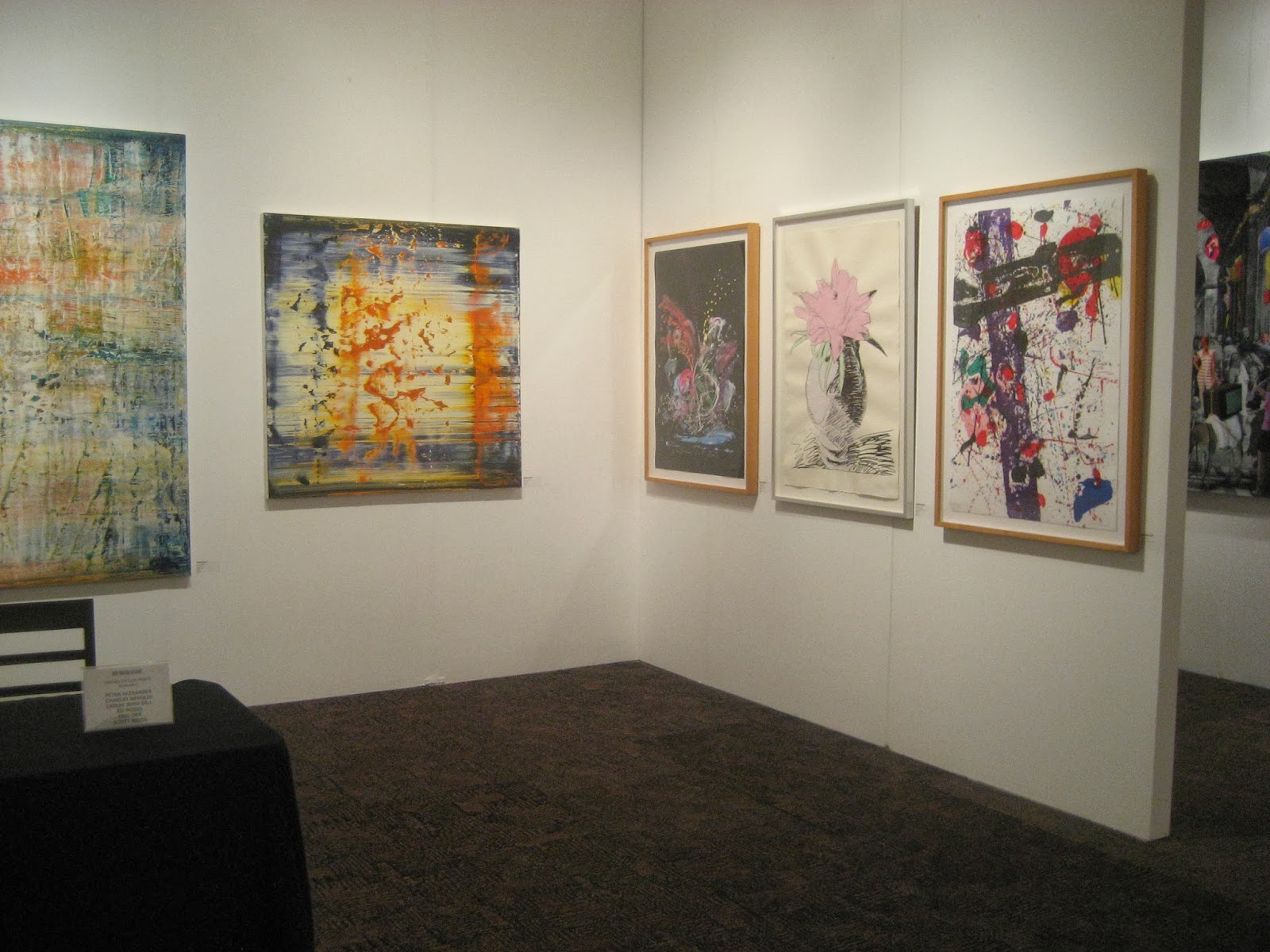 I had to laugh when I saw the Marc Sijan sculpture below - akin to the one last year that I said good morning to each day. This one too is impervious to pleasantries; nevertheless he provided a sense of "security." 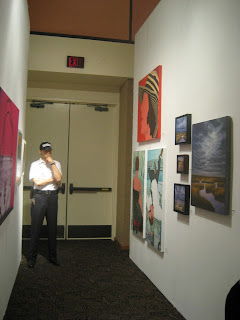 As the reception is just beginning, an obligatory before the artwork pose. Glad we remembered to shoot one this year. 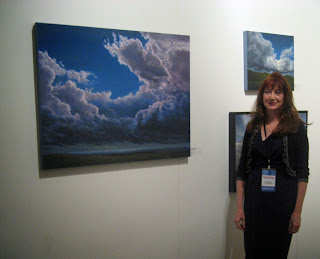 The opening reception in full swing. This photo is borrowed from the Palm Springs Fine Art Fair Facebook page. I added a red arrow pointing to our booth. 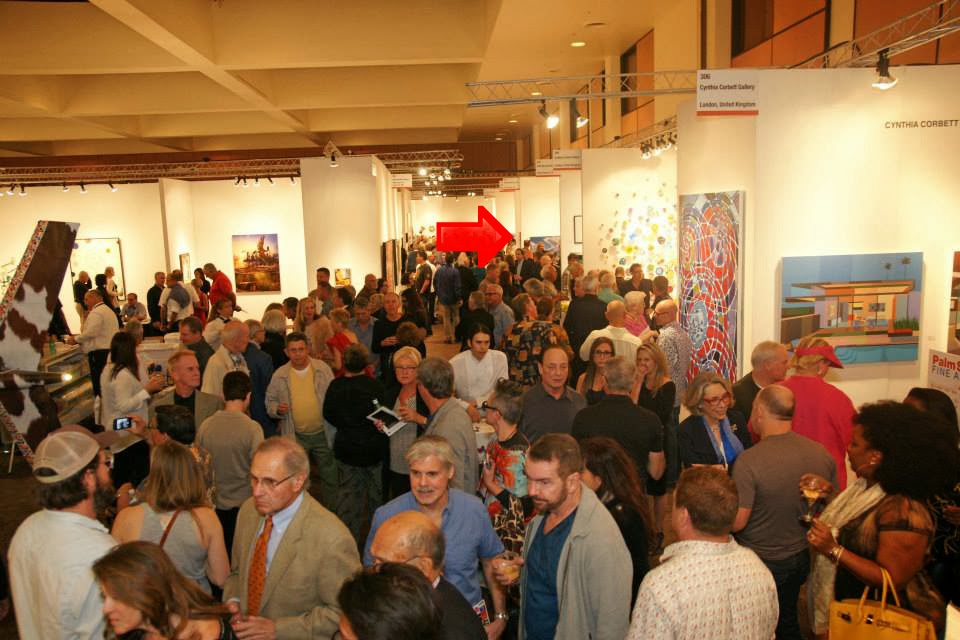 "Your hopes, dreams and aspirations are legitimate. They are trying to take you airborne, above the clouds, above the storms, if you only let them." -William James

This is one more of the selection of paintings going to Palm Springs this week for the 3rd annual Palm Springs Fine Art Fair, taking place this coming Presidents' Day weekend. There is still time to email me for a free pass, if you act today.
at February 10, 2014 8 comments:

“Under the thinning fog the surf curled and creamed, almost without sound, like a thought trying to form itself on the edge of consciousness.” ― Raymond Chandler, The Big Sleep