A Walk in the Ballona Wetlands: Ballona Creek, Ballona Network

I had the pleasure yesterday of walking with a group of people, mostly artists, through parts of the Ballona Wetlands. The purpose of our walk was to become informed and inspired to perhaps create artwork for the 2nd Annual Ballona Network Art Auction.

Lucy Blake-Elahi, Jeanette Vosburg, and Rex Frankel (local wetland expert) were there to lead a close up view of the water, plants and birds in the wetlands by Titmouse Park down in Playa del Rey.

I am excited by the idea /proposal/hope of connecting open spaces, wildlife habitat, parks and neighborhoods via walking, biking and non-road public transit such as the potential Ballona Creek greenway to connect from the ocean to Griffith Park and Franklin Canyon Parks. See Connecting California.org
at May 30, 2007 No comments:

I finally got a new easel.

My old easel had been getting on my nerves for some time. I'd had it for ages and although sturdy enough it was difficult to adjust the height and one of the front casters wheels had a tendency to fall out.

I decided that a quality that I must have in a new easel is a crank to raise and lower the height of the canvas easily. Without this I end up trying to raise and lower myself, often ending up in odd positions. As I started shopping I found plenty of easels that have cranks.

Although beautiful, the problem with many of them is that the adjustment results in the entire mast raising, so unless you have good ceiling height in the studio you won't be able to lift the canvas without the top of the mast hitting the ceiling. I also wanted something that didn't require training to figure out how to assemble. I visited lots of local art stores to see various easels and a few had demonstration easels that didn't function because they weren't put together correctly. The location of the crank is important to me too. Some easel manufacturers put the crank off to the side or in the back. I don't want to have to leave my spot to make a small adjustment.

I finally selected the one pictured below, had it delivered, and put it together without too much difficulty. So far, it works like a dream.

The canvas holder shelf raises and lowers while the mast remains stable and the crank is right on the front. Also, as you can see, the surface can also be tilted forward, as well as back.

Update: I've been happily using this easle for the past three or four years and it's been wonderful. The one thing to watch out for is to be sure and set the brake properly. Once or twice I neglected to do that only to have it slip, causing the easel to start lowering on it's own, gaining speed as it goes. That would be okay, except for the crank turning bumping my leg each time it turns, all the way down.

On a fun note, raising the easel makes a wonderful gear cranking sound. If you're a fan of Lost, the sound might make you start looking around for the smoke monster.
at May 28, 2007 4 comments:

Email ThisBlogThis!Share to TwitterShare to FacebookShare to Pinterest
Labels: Art Supplies and Materials

Samuel Bak in The Lucid Dreamer 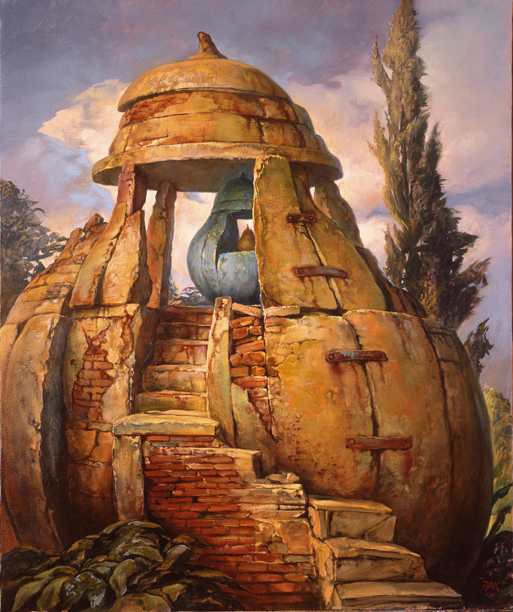 Sanctuary
One of the artists included in The Lucid Dreamer is Samuel Bak. The work presented in the book is titled Parable and it depicts a man seated within and between the halves of a large golden pear, which is itself wedged between the buildings of an old city. He is also holding a pear which he is peeling. He has a series of new work along a similar vein called Fruit of Knowledge.