While considering what to bring on a painting trip I looked at buying plein air panels to paint on. They tend to be light and small - great for carrying and it seems a good idea keep luggage weight as low as possible while traveling. And since  there are slots to carry thin panels built into my painting box, I might as well use them. My other criteria were that they be quality material, archival, and cruelty free. In other words I wanted oil primed linen mounted on a board - not on a paper or foam product. Inexpensive would be nice also!

I finally found what seemed like the perfect product, oil primed linen, mounted on a board. I ordered a half dozen. They arrived and as I was about to tear into the plastic wrapping, I noticed that the label stated "primed with rabbit skin glue". Fortunately the supplier agreed to take them back. I never did find the product with the exact specifications I wanted, but I did find Art Boards Plein Air - Archival Mounting Panels. These are a thin maple board coated with a heat activated reversible archival adhesive. I have plenty of small pieces of oil primed linen - trims left over from stretching larger surfaces, so using these I've tried them out and I'm happy to say they are quite easy to use. The boards need to be briefly heated: two minutes at 250 degrees - an oven works great - then press the linen (or canvas, or paper, or whatever you are using) to the adhesive surface while it cools. Once it has cooled to about 150 degrees or so, the bond is made. I also tried the reversal to see if it really worked - and it does. All you need to do is reheat the panel and while it is still warm the linen lifts right off.

I'll also bring along some pieces of unstretched linen to tape or clip to a board as I work that I can stretch back in the studio.
at September 26, 2011 3 comments:

On the Easel, On the Wall, On the Floor


Here's a sneak peek at the works in progress in the studio. The painting above just barely fits on the easel, while the two triptychs below are being painted as they hang on or lean against the wall. The larger is 10 1/2 feet wide, and the smaller one is 6 feet wide. 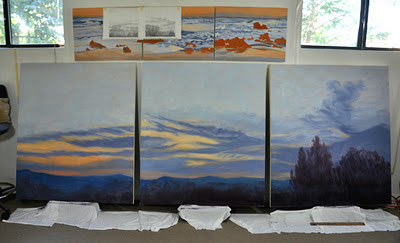 What Happens When You Don't Pick the Artichoke 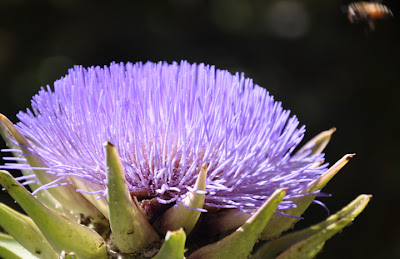 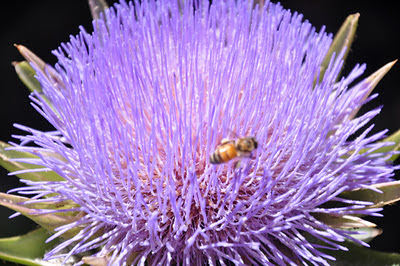 I sometimes find it difficult to decide whether to have a feast for the eyes or plate. This year I left one bud to flower. I can't get over the color. 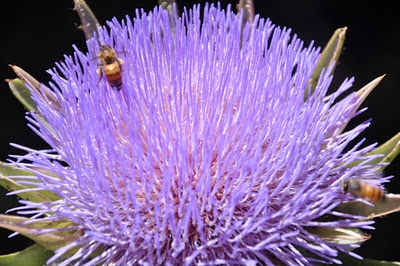 While I was taking these photographs one bee after another visited this flower. They each climbed all the way in through the purple to the middle and then climbed back out and went on their way.
at September 13, 2011 5 comments:

Email ThisBlogThis!Share to TwitterShare to FacebookShare to Pinterest
Labels: In the Garden

Something Old or Something New: Which to Exhibit in a Group Show?

In deciding what to put into a group exhibition, some of the decision making may already be done for you. Many times when one is invited to a group exhibition there is already a theme in place, which will limit your options. It could be as general as a small works show or as specific as work with the color red.  Also group shows tend to impose size restrictions such as nothing larger than 24 x 30".

There are often other rules - only work completed during the past 12 months, or two years, or three, or only works on paper.

Recently a friend was considering whether to exhibit an older piece that he already knew was a strong work, or something from a brand new series still forming. My advice:

There are pros and cons to both. I'd probably go with the new work as long as you have the strength of vision to not be put off if you don't like the feedback. I sometimes "protect" new work until I feel it's strong enough on it's own and my idea of the direction it's going is well established. I've had the experience of selling really new work that I actually would have benefited from keeping around in the studio while I worked on the rest of the series. While I was happy to have a sale, it felt like a little setback to not have it for a little longer to refer to.

On the other hand, positive support can energize you and exhibiting can be a good way to see if a piece stands on it's own, apart from the series. Also, if you're not going to be making more of your older work it probably won't help you much to create a big demand for it - unless you have plenty left over that you'd like to sell. But, take the venue into account - sometimes it feels better to show something that you already know is really strong.

What would you do in the same situation? Would you show something old or something new?
at September 06, 2011 4 comments: