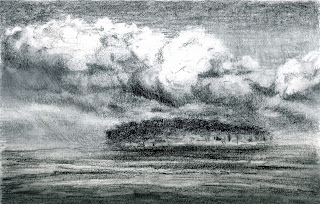 Abandoned 4 x 6" graphite on paper ©2011 Katherine Kean
There is a lot to see, draw, and paint, in and around Cape Cod, Massachusetts. I came back with some ideas from a visit there last summer that I'm now having the opportunity to flesh out.

This first drawing is of an abandoned island on the Canal. Even though it was a pleasant, sunny day, this island managed to have it's own cloud and give a mysterious impression. The island was abandoned after the property was vandalized and is now for sale. From my perspective it didn't seem very far from land, but one would still need a boat to come and go. 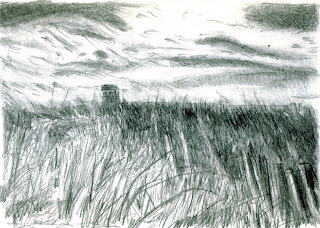 Dune Grasses - House 4 x 6" graphite on paper
©2011 Katherine Kean
This view had a decidedly Hopper/Wyeth feeling to it, if that's even possible. I have an underpainting started on this one. It'll be interesting to see where it goes.
at January 26, 2011 6 comments:

Energy and Art: Part One 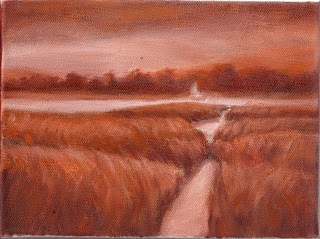 
On an earlier post of Boat – Marsh, Diane Hoeptner made the astute comment that it would be considered important in Feng Shui to have the boat sailing inward to the home – not situated so it appears to be sailing out of a door or window. It’s about directing the energy where it would be most beneficial.

Without going into all of the mechanics of Feng Shui, which uses both astronomy and geography to align with the flow of energy - especially in the situation of buildings in the environment. This entire system is beyond the scope of this post, but we can take a piece of it and look at the logic of one of the ways the energy of artwork affects us.

Your brain has a system called the Reticular Activation System that acts as a filter between your subconscious and your conscious. What you see goes right to your subconscious, however when you deliberately choose an image you make it easier for your brain to pick it out from loads of daily sensory input and bring it straight to the surface. From there you will begin to be more aware of circumstances, ideas, relevant information and so on that align to the image. So the more reminders you have of “your ship coming in” the more your brain will seek out ways to bring it into your reality – all the more so if the mental picture is accompanied by intense feelings. This is one of the reasons it is helpful to surround yourself with artwork and images that can help the flow of energy in this way. 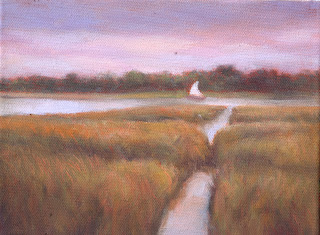 Work in progress Marsh-Boat ©2011 Katherine Kean
Above is the first color layer on this study for a much larger painting. I'm going to make sure that I keep this ship in the correct orientation. I'm still waiting for my shipload of fresh canvases to arrive!
at January 21, 2011 12 comments:

Email ThisBlogThis!Share to TwitterShare to FacebookShare to Pinterest
Labels: Something to Think About 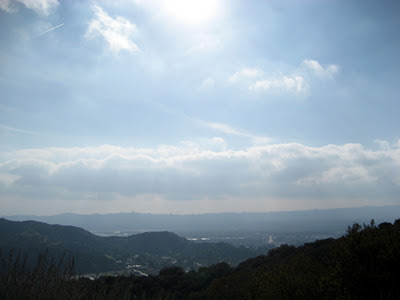 "Everyone needs beauty as well as bread, places to play and pray, where nature heals and give strength to body and soul alike."  — John Muir

I had the pleasure recently of hiking within the Fond Family Open Space. This is a parcel of land in the Verdugo Mountains, about 500 acres in size, purchased by the Fond Land Preservation Foundation and set aside as a preserve and as a deterrent to future development. Although this is private land, from dawn until dusk it is open for the public.

I was hiking with a large group of 50 or so people and a handful of dogs. We entered the trail from an easement in Shadow Hills and hiked from west to east, nearly to the 210 Freeway. I've always admired the view when driving past this land on the freeway. It was fun to be in the vista for a switch. 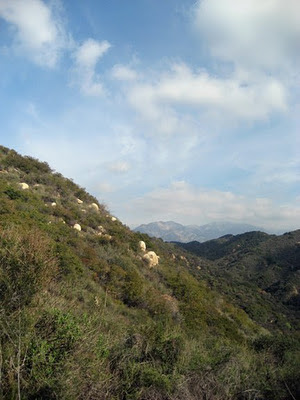 The trail we followed stayed on the ridge, granting spectacular views in every direction, and a couple I may like to paint. While most of the group continued on, a half dozen of us turned back earlier. As easy to follow as the trail appeared heading out, on the return trip there were a few turns in the trail and at least one that I might have made the wrong decision about taking. While not a disaster, as civilization is all around, it would likely have ended somewhere far from the car, thus completely undermining the whole purpose of returning earlier.

More information about the area can be found at the Fond Family Open Space website. I'm looking forward to returning there soon.
at January 17, 2011 10 comments: 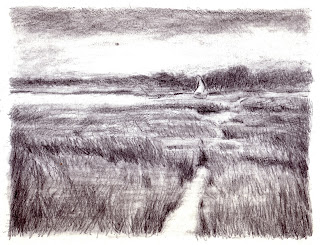 This drawing is being worked into a painting. I may have decided to change the direction of the boat, perhaps because it's the start of a new year, it feels like it should be sailing out instead of in.

One of the changes that I've decided to make in 2011 is to seek out and use vegan Art Supplies. At first glance this doesn't seem to be too much of a challenge, but a closer look reveals animal products used in a variety of products that I would not have thought of. Brushes made from animal fur and paint named "bone black" are obvious. Bone black is a component of Gamblin's Van Dyke Brown, Ivory Black, Asphaltum, Portland Greys, and Payn's Grey. Gamblin's website lists the ingredients used in their paints. That the sizing used in my favorite Arches watercolor papers includes gelatin derived from animals is sad news. I had been using their watercolor paper for both drawing and watercolor and  I'm still looking for something to replace it with. I've heard that both Strathmore and Yupo use no animal products when they manufacture their papers. For drawing I might consider using Arches cover stock, which has no sizing.

The good news is that these days good synthetic brushes are available, so there's really no need for animals to be captured or killed to make a brush. I was also concerned that the oil primed linen that I like might be sized with rabbit skin glue. However it is not. Signature Canvas, who supplies my favorite painting surfaces considers rabbit skin glue as too unstable in humidity changes to use on linen, so they size instead with a synthetic glue. The gesso that they use for acrylic priming is also a kind that does not include any animal products. UPDATE: Signature Canvas is no longer in business. Most of the oil primed linen surface manufacturers I have contacted while sourcing substitutes have told me that they no longer use animal hide glues. Claessens pre-primed oil primed linen uses no animal products.

Updates: I've used Aquabee Super Deluxe Sketchbooks for about as far back as I can remember and I'm happy to report that the sizing used is cornstarch based, not gelatin or animal based.
Daler-Rowney Canford Drawing Papers are vegan.
Claessen's oil primed linen is vegan.
Recent correspondence with Golden about their gesso discloses that there is no rabbit skin glue in their acrylic gesso, or in any of their acrylic products. Here is a link concerning vegan use of their products: http://www.goldenpaints.com/animalingredientsanimaltesting.
If in doubt contact the manufacturer to ask. I have found all of them responsive and helpful with the exception of Arches.

I've had the desire to make larger artwork, and I also appreciate convenience, which may be why I've been looking at making modular artwork, such as triptychs and diptychs, as they are called when placed side by side. When they are stacked one above the other it is simply called a modular piece.

Size is a consideration, not only in storage, but also in shipping. There are size restrctions to what can be shipped through UPS, FedEx, and the USPS. There are also insurance limits. Fedex will only insure up to $500.00 and UPS up to $1,000.00. The US Postal Service does not seem to have the same qualms about insuring artwork for shipment.

I recently sent artwork across the country and chose USPS just for this reason. I got a strongbox from the Airfloat company. This is basically an art/mirror box such as those sold at Uline, but Airfloat had the better price.

It is a lined box with perforated foam that is easy to cut to conform to the artwork, so that the art rides in a cushioned support. I ordered the version that has a reinforced lining to resist punctures. The boxes are strong and lightweight and reusable. Between the strongbox and the insurance I had confidence. I needed that confidence when soon after the box was picked up it mysteriously dropped out of the tracking system and for two days was "lost."

I've had a history of ups and downs with the Postal Service. Once, I was told that my 4 1/4 x 6" postcard announcements were too big, resulting in a surreal tug of war across the counter as I tried unsuccessfully to take them back. Another time the mailman could not find my house to deliver a package and so just dropped it by the side of the road. On the upside every claim I've ever had has been settled swiftly and completely.

In this case I called customer service and got trapped in one of those voicemail loops where the system kept asking for the label number; which when entered instructed me to contact the sender, which happened to be me. It was a voice system and I ended up yelling "No!" and "Help!" at every option, another surreal moment until an actual person eventually picked up and took down my information.

As the day wore on and the package was not found I was having very negative thoughts and not sure what to do. As it became evening I decided that there wasn't much I could do, at least not until the next day and so I put the Post Office, labels, tracking, and insurance out of my mind. Around 8:30pm the phone rang. It was the Post Office, calling to say not to worry. No, they hadn't found my package, but were sure it would turn up soon. It was suggested that I call the Post Office on the other end and ask if they'd seen it. This seemed a little too easy but this is exactly what I did the next day. Miraculously, or so it seemed at this point, they had all the label and tracking info, told me it was on the truck and would be delivered momentarily, and it was.

Will I use USPS again for shipping? It looks like I will, at least for anything valued at over $1,000.00. Have you ever shipped artwork? If so, what service did you use and what shipping materials, and was it a good experience?
at January 04, 2011 8 comments: