Pareidolia is the word for the phenomenon of seeing unplanned, or unintended images in artwork. Typically faces, the most famous example is probably the Man in the Moon.

"If you look at any walls spotted with various stains or with a mixture of different kinds of stones, if you are about to invent some scene you will be able to see in it a resemblance to various different landscapes adorned with mountains, rivers, rocks, trees, plains, wide valleys, and various groups of hills. You will also be able to see divers combats and figures in quick movement, and strange expressions of faces, and outlandish costumes, and an infinite number of things which you can then reduce into separate and well conceived forms."

Below are a couple of examples of my paintings that I've been told have unintended images in them: 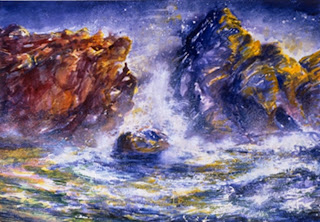 Can you spot the pareidolia? I've been told that the top image has a man's face with a beard and white hair, in the clouds, sort of like Santa Claus. In the next painting I've been told there are fighting beasts with gnashing teeth, eyes, and guns. But then, someone else saw flowers and stars.

Like Rorschach blots, when it comes to pareidolia, state of mind seems to have a lot to do with what one does or doesn't see.

For fun, here are some links to more obvious examples:

Email ThisBlogThis!Share to TwitterShare to FacebookShare to Pinterest
Labels: Something to Think About

Small Boat on the Great Marsh

"If you want to build a ship, don't drum up people to collect wood and don't assign them tasks and work, but rather teach them to long for the endless immensity of the sea." Antoine de Saint-Exupery

I seem to be doing a lot of marsh related work lately. Earlier stages of this painting can be found here - the sketch, and here - the underpainting and initial color layers.

"The snow is melting into music." - John Muir, John of the Mountains: The Unpublished Journals of John Muir

Another drawing of the marsh at dusk in the winter as the snow melts.

Not just beautiful to gaze upon, marshes are valuable for many reasons. I find encouragement in the findings of this research:

Salt marshes may help slow the rate of climate change in the future, as rising and warmer oceans will enable them to more quickly capture and remove carbon dioxide from the atmosphere, according to a study published in the journal Nature: Salt Marshes May Slow Climate Warming . . . For A While.

“Our research suggests that the value of these ecosystems in capturing atmospheric carbon might become much more important in the future, as the climate warms,” said Matthew Kirwan, a University of Virginia environmental scientist, and the lead author of the USGS-funded and supported research.

Salt marshes store enormous quantities of carbon, essential to plant productivity, by, in essence, breathing in the atmospheric carbon and then using it to grow, flourish and increase the height of the soil. Even as the grasses die, the carbon remains trapped in the sediment. The researchers’ model predicts that under faster sea-level rise rates, salt marshes could bury up to four times as much carbon as they do now.

“One of the cool things about salt marshes is that they are perhaps the best example of an ecosystem that actually depends on carbon accumulation to survive climate change: The accumulation of roots in the soil builds their elevation, keeping the plants above the water,” Kirwan said.

Email ThisBlogThis!Share to TwitterShare to FacebookShare to Pinterest
Labels: atmospheric, drawings, Inspiring Locations: Cape Cod, Something to Think About

“The sky grew darker, painted blue on blue, one stroke at a time, into deeper and deeper shades of night.” - Haruki Murakami, Dance Dance Dance

This isn't the first time I've painted this sky, this view, and I suspect I will keep on exploring. I'm amazed by the indescribable hues of this sky at dusk. I'm not talking about the vivid reds and oranges that are also breath-taking, but the other ones, the tarnished gold, the muted plum, the softly tinted grays. I wonder if it's an effect of being midway between an ocean and a desert. In the moments when the sun is all but gone and the darkness hasn't completely taken over I can see with my eye so much space and depth and subtlety of color. One day I hope to get closer with paint to what I sense with my eyes.