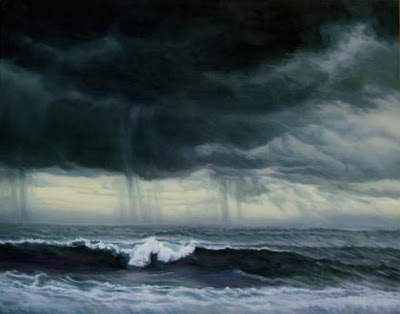 Last week when I reached for some cadmium orange paint and came up empty I was confused. I'd recently bought two tubes and I don't have any orange paintings, so where did it all go? The answer is qute simple, not that I realized until after looking high and low, through every paint drawer and box, and on every shelf that I might store back up art supplies. I use cadmium orange in underpainting, especially under green grasses like this marsh painting and also to mix darks. I mix it with ultramarine blue and a bit of alazarin to get a deep color that is nearly black, as in the new painting above. Fortunately I happened to be going by the art store the following day and I was able to restock, because one can't get cadmium orange from mixing cadmium red and cadmium yellow.


Some say we are lucky to still have the cadmium pigments to paint with. In the 90's legislation was proposed to ban all the cadmiums due to health and environmental hazards. Amid great outcry from the art community paint for artists' use was excepted from the ban. This article, from the Golden Paints website mentions that even though it is still allowed for art use, it may become increasingly difficult to find as widespread manufacture declines. I sure hope that isn't true. 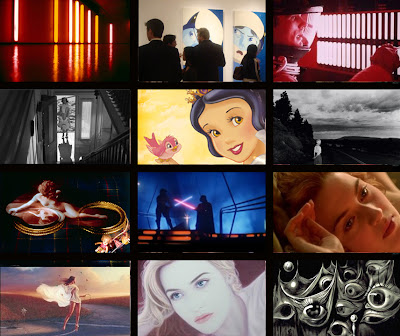 Having recently looked at how artwork has been an influence on motion picture design I thought it would be fun to turn it around and take a look at some artists whose work has been influenced by the movies.

Cindy Sherman comes to mind and her series Untitled Film Stills, a series of photographs, with herself as the subject acting out postwar cliches. The results look like movie stills or publicity pictures.

Another example is Alain Fleischer's Time Exposures. Fleischer explores the themes of time and movement in cinema and photography and the intersection of the two disciplines.

Another artist whose work pulls from motion pictures is Josie McCoy. McCoy's iconic portraits of perfect celebrities are painted with many layers, achieving a luminous effect not unlike what one gets from a screen image. The results are ethereal, highly objectified, and to me have a frailty, or fleeting quality.

Hitchcock seems to have had a profound influence on contemporary artists. This article about the touring exhibition NOTORIOUS MOMA (originated by the Museum of Modern Art Oxford) goes into this influence in detail.

Here is an article about a group exhibition commemorating the 10th anniversary of Kubrick's death: Taming Light. The exhibition includes painting, photography and illustration paying tribute to one of the pre-eminent filmmakers of the 20th Century, Stanley Kubrick.

Anime art comes from Japanese animation as well as the influence of animated Disney films. For the purpose of this post I'm applying the term anime as an influence for a wide range of contemporary art styles.

Where the Lava Meets the Sea 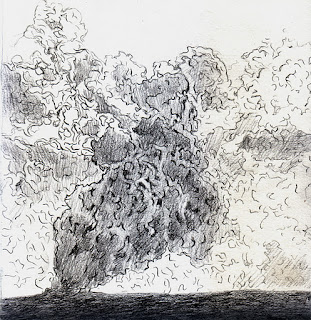 This is not that eruption. This drawing is of the steam plume that forms when the lava meets the sea, from the ongoing eruptions in Hawaii. From the National Park Service website, "The steam plume produced by lava entering the ocean contains fine lava fragments and an assortment of acid droplets."


I'm one of those people who cannot seem to get enough of the sights of natural phenomena, the shifts and events, including storms and volcanos. I'm not referring to images of destruction and loss, but the visual evidence of the energy released - the rolling, spinning, spilling, rising, and billowing force. I also find these phenomena challenging and fun to paint.

This past month or so, I've been striking items off my To Do List right and left. Completed are all of the exterior repairs to my house; mostly siding - in addition to wear from the constant southwest exposure, a big wind picked up one of the closed patio umbrellas and thrust it into the side of the house, leaving a hole. I also had gate and deck repairs done. The garden is planted and producing; I've got peas and greens. Taxes are done, the brush is cut and ready for inspection - I hope that brush clearance inspection occurs before it rains again and everything re-grows. I even rehung a curtain rod that fell out of the wall during the residing project. It's up, but I'm having the dickens of a time getting the super glue off my fingers - just kidding! Sort of....

So here's a new list; a sneak preview of some upcoming posts:

3. Holding work back for upcoming exhibits: pros and cons.

4. Where did all of my Cadmium Orange go? The mystery solved...

Email ThisBlogThis!Share to TwitterShare to FacebookShare to Pinterest
Labels: In the Garden

This series on the influence of art on motion picture design would not be complete without mentioning Salvador Dali. He went farther than influencing the look of movies by collaborating with filmmakers, from the Marx brothers to Disney to Hitchcock and eventually making his own films.

There was a traveling exhibition two or three years ago highlighting Dali’s connection with film that I was fortunate to see while it was at LACMA. The exhibit included painting, film clips from Spellbound and Destino, along with related photographs, drawings, and manuscripts.

Hitchcock loved art and was a collector. His movies show the influence of several artists, and his films are infused with Symbolist and Surrealist imagery. Hitchcock sought out Dali for the way he depicted dreams, saying, “All Dali’s work is very solid and very sharp, with very long perspectives and black shadows . . .Dali was the best man for me to do the dreams because that is what dreams should be.”

Times Online article Surreal to Reel- Dali at the Movies
at April 13, 2010 2 comments: 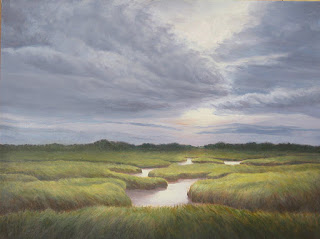 Wayward
18 x 24" oil on linen
© 2010 Katherine Kean
One morning last week I walked into the studio to see paintings scattered about on the floor. This was not the result of earthquakes, the kittens seem to be the culprits. At first I didn't notice any damage, but a closer look revealed some light scratches on the surface. It seems that in an effort to get to the window above, the kittens attempted to climb the paintings leaning against the wall. I'm lucky that the marks didn't go too deep - the underpainting was unscathed. I very lightly sanded the scratched areas and repainted. I've also rearranged all the paintings in the studio so that none of them look, to a kitten's eyes, like the ladder to a view. 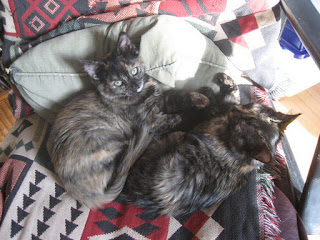