Art and the Brain, Part 1

Neuroesthetics is a subject that I've long had an interest in so, I was pleased to have the opportunity recently to attend a presentation about Art and the Brain, lead by researcher and writer Erik Nemeth, that took place at Cassandra Tondro’s home. In his presentation, Erik draws upon the work of Semir Zeki about neuroesthetics, a relatively new science that explores how the brain perceives pleasure.

The artists present seemed to be relieved to hear Erik say that artists intrinsically understand perception without having to know the biology of how our eyes and brains work and that the study of neuroesthetics has validated the artistic approaches used throughout history for conveying expression and meaning.

From the work presented by the group of artists present he chose one from each artist to discuss and offer comments. As he approached a piece Erik would explain how he was seeing.

Often the first thing he noticed was contrast, or lack of contrast, that would draw the eye, as well as what associations an artwork might have for him. It is natural for the brain to look for associations - to look for something that it recognizes or holds meaning.

For the painting above he mentioned that to him, the forms and associations came slowly because the painting is low in contrast overall and without large color differences – almost monochromatic with most of the color falling into one end of the visual spectrum.

He also explained how the blue helps to create a feeling of great distance, that our brains automatically place blue in the background as we are used to seeing it in the sky. He mentioned that what contrast there is coincides with an intersection of form and he felt that created a sense of reassurance. The vagueness and darkness of the outer areas then felt less threatening.

He spoke about how this vagueness adds to the ambiguity or mystery. I'll follow up on that in the next post.

Email ThisBlogThis!Share to TwitterShare to FacebookShare to Pinterest
Labels: atmospheric, clouds, neuroaesthetics, Something to Think About


I'm looking forward to completing the triptych shown above soon. When I get a chance, I find it's helpful for me to step back and look at work as a photo. I see things - overall patterns and suggestions that I'm not as likely to see on the easel where I'm focused more on details. It's helpful to get a look before it's too late to incorporate what I can learn from this perspective.

It's been challenging to find painting time this summer - a hazard for me as soon as the weather turns nice! Plus, I've had so many other studio projects happening, everything from re-photographing my current inventory for high resolution display to adding prices to all the work on my website. It is all getting done and for that I can thank the latest heat wave that has made it too hot to be distracted by the garden.

Have you ever noticed how your Pinterest Art Boards can help to define your focus? That's happened for me. Here is a recent screen shot of one of my Art Pin Boards where I pin the images of other artists' work that I am attracted to, admire, or feel inspired by: 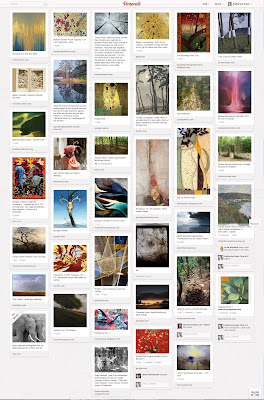 Looking at this I become aware that I am attracted to neutral and warm colors, golds and some red.  I always knew there was a lot of blue in my work and although I often under paint in gold or orange,  warm colors are not something I automatically reach for.

I see certain composition ideas repeating: strong vertical and diagonal lines, a central burst of light that radiates out, as well as a leaning toward a formal structure, balanced by amorphous or flowing shapes.

I tend to think first of subject matter or mood when thinking about art, but without that basis I see the abstract qualities of art I am attracted to, how I like for the canvas to be divided, what the shapes and colors are, whether contrast is strong, or edges sharp or soft and so on.

I'm sure that each person's boards function differently for him or her, but I was startled by how clearly this one became a snapshot of my current aesthetic preferences. Do you have any Pinterest boards? If so, what have your collections shown you?

Email ThisBlogThis!Share to TwitterShare to FacebookShare to Pinterest
Labels: Art Collecting, Artists I Admire, Something to Think About

Here are a couple of drawings inspired by a recent trip to Cape Cod. The sky was very hazy and soft, but through the haze I could barely make out massive cloud shapes. There is something about the soft shapes and scant beach grasses and the people looking so tiny in the distance that I like to paint.

I was not imagining the clouds. Later on a thunderstorm blew in. Everything darkened and then it poured. The temperature up until then had been in the 90s and it dropped about 30 degrees. Ah, thank you rain!
at August 06, 2012 8 comments: