As you can tell I'm making some changes on my blog. My intention was to update my website, but I'm not quite ready to do that and I've recently discovered some of the new (new to me, anyway) widgets and add ons. There may be some redundancy while I try out new features, for example overlapping in the links and blog links.

Let me know how you like it or which widgets you find most helpful.
at February 21, 2009 2 comments: 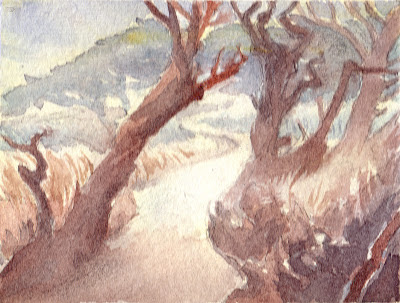 It's already time again to bring new work in to the gallery. This past month has gone quickly. Thankfully, Cole is starting to feel and look a little bit better. He has come out of his hiding place way in the back of the closet where I put some thick towels to make him more comfortable and he more or less slowly follows me around. He still isn't eating or drinking on his own and having to keep up with taking care of that by hand is keeping me on a very short leash with trying to time every trip out to an hour or less. That wasn't too difficult this past week or so, because I've had a cold that kept me home anyway and not doing much except sneezing and coughing and using up every tissue in the house. With all of this my studio time has been very limited, but I am back on track this week. I have two paintings in their final stages and two started and today I finally got around to updating portfolio pages. Hopefully a website update will soon follow.

I'm bringing the diminuitive watercolor above for the ever changing North Gallery, at TAG. It's a sketch from the Cypress Grove in Point Lobos State Park. In keeping with the times I've been focusing on presenting smaller, more affordable pieces.

Email ThisBlogThis!Share to TwitterShare to FacebookShare to Pinterest
Labels: Cole, My Work on Exhibit, Pets and other animals, TAG Gallery

It's unusual to see these three all hanging out together. The sudden togetherness is mostly due to the fact that one of them, Cole, the dark one, has recently become sick. He has chronic kidney failure complicated by dental problems and anemia. He has lost a scary amount of weight over the past two weeks. He had oral surgery last week to extract a tooth and they put a feeding tube in at that time. While his mouth heals I can give him water every hour, food every four hours, and medication every twelve hours, which, as squeamish as I am, is much easier with the tube. He spent most of this past weekend hiding in the closet, although some time during the night he managed to find his way to the bedroom and jump up on the bed on his own power, because when I woke up this morning he was sleeping next to me. As a very independent outdoor cat - known for his amazing hunting skills, it's unusual to have Cole indoors so much. His mother was homeless and he and his siblings were born in a field and he still has his wild habits. Using a litterbox is unfamiliar, but he's starting to catch on.

Bear, the Eskie in the picture above, as the one seemingly in charge of everything going on in the house is very curious about what's going on and a little too curious about the tube coming from the cat that smells a little bit like cat food. I am reminded all too well about the incident with the forgotten catheter a couple of years ago. While I am taking care of Cole he looks on with great concern and if I leave the room he comes after me, barking to let me know that Cole is in the closet!

In between trips to the vet I got this painting started, which I'll continue to work on between feedings: