A couple of years ago I posted a list of the top eleven artists that I felt had the biggest influence on my work. A top ten list would be a much rounder number I know, but I just coldn't narrow it down that far. Now, I'd like to expand on that list with some additional artists that I've been looking at more carefully over the past few months, and add these seven to the first eleven. Some of these artists' works relate to each other and some do not, so, in no particular order:

George Innes Rich and mysterious, his paintings allow your mind to create what isn't painted, while hinting at more.

Andrew Wyeth Beautiful browns that are almost monochromatic - images are stark in composition, yet rendered in detail, and have the ability to draw you into their story.

Lawren S. Harris Harris's paintings seem to seek out a spiritual essence in nature, allowing anything extraneous to this experience to seem to drop away.

Emily Carr I should have realized earlier that I couldn't have Goergia O'Keeffe and Agnes Pelton without adding Emily Carr. Her work also seems related to Charles Burchfield's. She seems to paint the wind.

Frederick Judd Waugh Known Best as a marine painter, he understands the physicality of the sea and powerfully conveys the experience of it.

Kaii Higashiyama Simulataneously grand and simple, his paintings are bold while holding a profound sense of quiet.

In looking over both lists I can see certain characteristics held in common. A strong affinity for nature is apparent, as well as the sense of mood. Technically, all of these artists combine softness and gradations with bold contrasts, shapes and composition. Values are key and so is a feeling for drama, even when it's a quiet grandeur.
at May 31, 2011 No comments:

New Painting: Between the Drops

This is third in the series that includes Counting Raindrops, and Connect the Drops. I was drawn to paint the subtle geometric patterns left by the drops as they fell and reformed again after being swiped by the wiper blades. Just when I think I'm done with raindrops - bet then they are a lot of fun to paint.

The sequence below depicts the progression of this painting from under painting to conclusion. 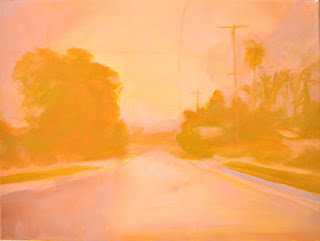 The under painting in warm colors to show through behind the cooler top layers. Approximate values and drawing are layed in. The first color layer - still plenty of under painting showing through. The values are well established. 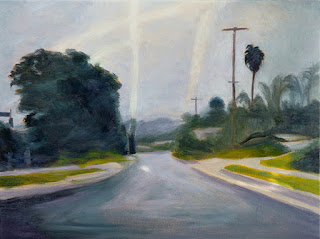 An additional color layer using cooler colors and more grays. Also starting to define the pathways the drops will follow. The drops are the last to paint. Oddly enough I don't have a preconceived way of approaching them. Sometimes I make a dark spot and then add highlights, other times I make a bright spot and then outline it with the dark.

Holding it Together on a Diptych, Triptych, or Modular Painting

A diptych in art consists of any two panels presented side by side. Traditionally these two pieces would be hinged together. In contemporary art it's not uncommon to see the panels simply hanging side by side, sometimes with a bit of space between. A triptych is made up of three panels, side by side by side.

When there are panels placed one above the other, or in larger, more complex groupings, it is then called modular art. In some works, pieces can be added or removed, or rearranged, to create a new piece of artwork.

There is an advantage to modular work. The smaller sections that make up a large piece can be transported more easily than a single large painting.

When I'm working on a diptych, a triptych, or a modular piece I use C-Clamps

to connect the panels. This way I can easily move around the multiple panels that make up one work as an entire unit, making it easy to take off the easel during drying time. 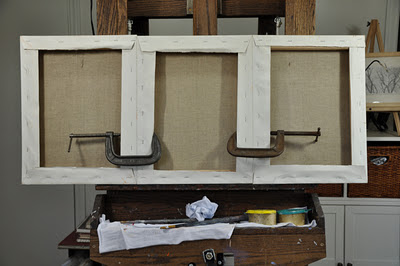 Email ThisBlogThis!Share to TwitterShare to FacebookShare to Pinterest
Labels: Tips and Tools 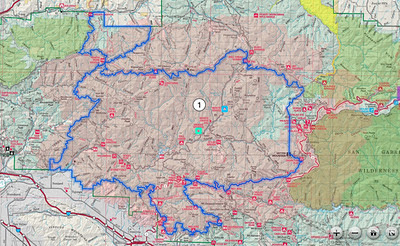 Although Hghwway 2 into the Angeles National Forest remains closed, today, two and a half years after the Station Fire, larger portions of the forest and many popular trails will reopen.

A word to the wise: many of the trails may not be in good shape. There may be washed out areas, rock slides, and fallen trees. Many trails will be different and many fire roads have yet to be graded.

Respect any trail closure signs you come across - although these trails are in the newly opened areas of the forest, some individual trails may still be posted as closed. For the sake of forest recovery and for your safety stay off those trails.

Brown Mountain (to the saddle)

Gabrielino (Switzers to Redbox to Chantry)

What remains closed? In the map above, everything within the blue border line is still closed. This includes:

Gabrielino from Switzers to Paul Little

I've heard that the parts of the forest have been open for awhile have been very crowded. It will be nice to be able to spread out a little.

The Forest Service map with zoom capability can be found here:http://maps.fs.fed.us/stationfire/

Email ThisBlogThis!Share to TwitterShare to FacebookShare to Pinterest
Labels: coast, Pets and other animals, Sold, trees

What is Your Most Used Color?