Last week Zabrina and Tashi turned one year old. Zabrina celebrated by catching her first bird. On this particular day I left the studio door open just enough so that the kittens could come and go. I was upstairs when I heard Zabrina's high pitched, little, squeaky meow. Wondering why she was in and crying I hurried down to the studio to find her standing over a lttle bird lying on it's back, feet up in the air, eyes closed. I assumed at first that it must be dead, but as I got closer I saw that it was still breathing. Gentle Zabrina, the likely suspect, seems to be lacking the killer instinct, and so far hunts just to play. I scooped Zabrina up and put her outside and closed the door. She squeaked in protest as I left her out while I went back to tend to the bird.

The little bird, mostly black with a black beak, except for a white belly and a bit of white trim on the wings, was still lying supine. It looked whole and unharmed, nothing broken, no bleeding, all feathers intact and unruffled. The heavy breathing continued and I could see the beak also gently opening and closing, but the eyes were till shut. I watched the bird breathe for awhile as I figured out what to do. I went and found a box. I didn't know yet if I would just be sheltering the bird for awhile or taking it to the vet, but I knew a box was the first step. I put on disposable gloves and was about to gently scoop up the bird. I hadn't yet touched it, but just came near with my hands when it suddenly jumped up, landing in one fluid motion in a standing position with wings partially outspread, eyes open, looking ready to fend me off. Both surprised, we stared at each other for a moment, then I placed the open end of the box over the bird. My plan was to slide a piece of cardboard under the box and carry the box with bird to a safe location. I inched the cardboard under, opened the top of the box to check on the bird, inched the cardboard some more, peeked at the bird, and on the third time that I opened the top flaps of the box the bird flew out and swept around the room coming to perch on top of the molding of the studio closet door.

At this point there was a choice for the bird. It could fly up the stairs and into the main part of the house where it might be difficult to get back out again, or it could go the other way and fly out the studio door. I quietly slid the studio door open and stood back out of the way. The bird flew into the air and made one circle of the studio and then found the door to the outside, chirping once at me on the way out.

I felt elated with the happy ending. I allowed the kittens back in, picked up the box that I never really needed, and got back to my day. Later I found that the little bird had left a little something behind. One lucky painting had been blessed with bird poo, probably during that circular flight around the room. I scrubbed at it with water, then Gamsol, and finally sandpaper and eventually got it all off. This week I will be retouching that spot. Small price to pay.
at September 28, 2010 6 comments:

Email ThisBlogThis!Share to TwitterShare to FacebookShare to Pinterest
Labels: Pets and other animals

I just sent out my Autumn Newletter. In it I wrote that it doesn't feel like Autumn to me, but like summer has finally arrived - it has been so cool and misty all summer up until the past few days. But I spoke too soon! I woke up to more cool, hazy, looks like it might drizzle any second weather. I'm enjoying it either way.

It's hard to believe that around this time a year ago we were still waiting for the Station Fire to be put out. Most of the Angeles Forest has been closed since then, to give the forest and the wildlife a chance to recover. The original plan was to reopen September 30th, but I've been hearing that it might take a little longer, or that some parts may reopen and other parts will reopen later.

Here is a video from one camera outfitted with motion sensors placed to record wildlife. The camera survived the fire because it was in a stream and sheltered by a boulder.

Angeles Requiem from Tocho on Vimeo.

Something to watch out for when the forest is reopened is the poisonous Poodle Dog Bush. Cute name, pretty flower, but if you touch it you may get poison oak type symptoms: blistering, itching, and swelling. This plant prefers not to compete with other plants, so it takes advantage of all the space after a burn.
at September 22, 2010 3 comments: 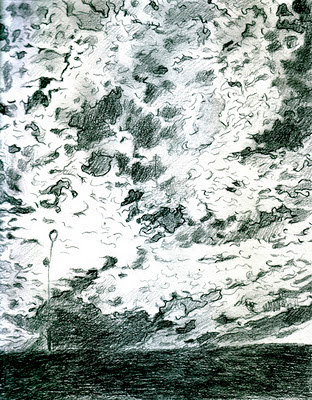 Here is a sketch that has hopes of becoming a painting. I have my doubts about the street light on the left in the bottom of the sketch. I may leave it out - or at least not paint it in until the rest of the painting is finished. Or, it may become a tree, if I can find just the right tree to go in it's place. Or, perhaps the painting will stand on it's own without a streetlight or a tree to provide context.

I got a chance to pick up the postcard announcements for the Atmospheric exhibition from the printer yesterday. They are 5 x 7" and feature Converging Conditions of the front with my name, and all of the exhibit info on the back. If you would like one, email me your street address and I'll send it out to you.

And some fun news - I heard from ArtSlant that Counting Raindrops has been selected as a Showcase Winner in the 5th showcase contest for 2010.
at September 15, 2010 7 comments:

Practical Advice for the Driven

I recently received a copy of Accelerating on the Curves: The Artist’s Roadmap to Success. This newly published book from Katharine T. Carter and Associates is a guide to career development for fine artists. I find it helpful that it divides a career into three segments: local, regional, and national, with clearly delineated directions and matkers for knowing where one is and what to strive for next in the general scheme of things. How clear is it? In addition to directions, included are sample cover letters to galleries, just in case you've ever wondered what to say or how to introduce yourself, samples of Press Kits, samples of resumes laying out the correct chronological order, and so on. There are essays from seventeen art world professionals and a section devoted to resources for artists.

With 363 pages I've just begun to get into this book - jumping into the sections I need right away. Not cheap, but full of value, I believe that it is only available through this link at the current time.
at September 08, 2010 4 comments:

Email ThisBlogThis!Share to TwitterShare to FacebookShare to Pinterest
Labels: Books

I’m just back from a trip back east, visiting Cape Cod and Maine. The trip to Maine was quick, picking out highlights from this wonderful location, while barely scratching the surface of all there is to see. The weather was sunny and bright on arrival, then partly cloudy turning to rain the second day, finally stormy and pouring, giving way to clearing by the third day before departure. I love rain and clouds and I was mesmerized by the waves, as well as the beautiful contrast of color and shape between the stratified red rocks and blue green water.

Below is a colorfully clad group waiting to witness the Thunder Hole spectacle, when waves during high tide slam into an under water cavern causing a sound like thunder as the water collides with trapped air. Stairs lead all the way down to rocks near the very bottom, but the lowest area was closed off. The reason for this may be due to the tragedy that occurred last year when storm surging waves swept several visitors into the water.

Meanwhile back in Cape Cod the drizzly skies of a few days prior had cleared enough to make a canal tour worthwhile. Below are a couple of images: an abandoned island - I believe it is for sale. It is accessible by boat and you'd have to arrange to have drinking water delivered.

Next followed a drive to the Cape Cod National Seashore to see beaches, marshes, and dunes and on the way back a visit to one of my favorite marshes while the tide was high, the weather clear, and at my favorite time of day, when the angle of the sun creates sparkle and depth.