Reading About the San Gabriels - Tall, Steep, and Now Waterproof 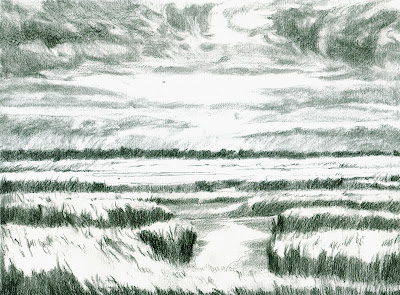 While I'm seeing the light at the end of the tunnel with the large paintings, I'm also looking forward to getting on with some new work, such as a painting from the sketch above. I've finally seen a clear change of season with the chilly Santa Ana winds - the first ones in many years bringing no accompanying anxiety. I was amazed yesterday by fantastic dust and ash cloud that the winds kicked up. The descent into winter here includes some cold days punctuated by a day or two in the 80's, accompanied by thoughts about the impending rainy season. I've been reading John McPhee's The Control of Nature

, specifically the chapter "Los Angeles Against the Mountains". McPhee's reporting style is entertaining as he lays out the hazards of living next to the "unimproved wilderness" known as the San Gabriel Mountains, among them:

1. Steep and rugged, the San Gabriels are twice as high as Mt. Washington - from base to summit 3000 feet higher than the Rockies.

2. Some of the most concentrated rainfall in the history of the US has occurred in the San Gabriel Mountains.

3. Burned chaparral releases wax like resins that coat the soil particles, creating a waterproof layer one to six centimeters down.

All of this together sets the scene for the "full scale flat-out debris flows", which McPhee reports on in his book. 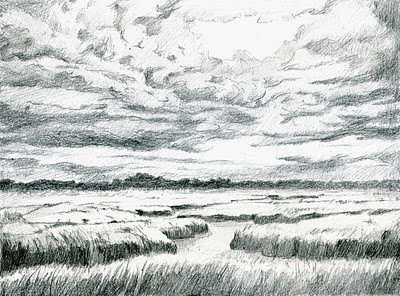 A Sketch of the Great Marsh
© 2009 Katherine Kean

I've had some wonderful dreams over the past few weeks, many of them from various categories of recurring dreams. Although I don't paint my dreams in the form of subject matter or even dream locale, I do use the feeling of many dreams for inspiration.

In a recent dream I found that there was a whole additional floor above where I live. I've had this dream many times, in many variations, and in this most recent one I felt all the excitement of realizing that there was so much more available to me. I started down a hallway that ran the perimeter of the building, looking into all the rooms as I went. All of the rooms were in good repair, many of them well furnished and even with closets full of clothing. The hallway continued on, and so did I, and so did the rooms. There were living rooms and dressing rooms. There were library rooms with floor to ceiling shelves full of books, there were kitchens and dining rooms and breakfast nooks. The further I went, the more I realized that there didn't seem to be an end to this building and I started running to see if I could get to the end. Eventually I tried a shortcut through the middle of the building, going through yet more and more rooms, and eventually came to realize that this particular space was virtually endless.

The excitement and wonder that I felt in the dream has stayed with me and has been like a whoosh of energy over the past several days.

Email ThisBlogThis!Share to TwitterShare to FacebookShare to Pinterest
Labels: dreams, works in progress

This past weekend I took a few moments to update my regular website, something I’ve planned to do since changing the look of this blog, in order to bring the look of the pages closer together. I haven’t made a lot of changes. I updated my resume and I took off everything that’s been sold. Everything showing is recent work. I removed old work, although I may put the old work back up at some point, but on a separate page. I also plan to start adding new work on it's own page during the next few weeks.

I got so into it that I went ahead and altered my MySpace page to match as closely as possible as well.

I feel inspired. I had a crazy, wonderful dream last night, but more about that later.

I Saw it in the Sky 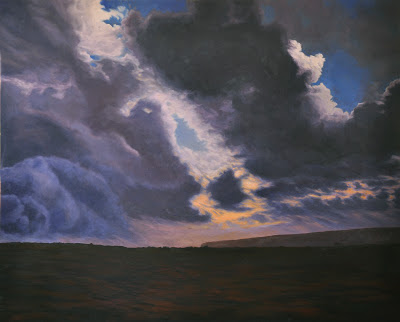 I'm back on the large surfaces again with the initial over layer of color complete on this, the largest one, while the other is getting it's finishing touches. I'm liking the effect of working on large areas with big brushes. I'd like to keep it as simple as this is while still feeling complete about it, although I'm wondering how it'll fit in with the rest of my work. Time - and the application of paint - will tell.