I've been drawing from dreams, choosing a few that stand out, especially after much time has lapsed. Many of these dreams are long and segments of them overlap, so in each I've decided to focus on selected key parts. In this dream what stayed with me was this scene. A chair in a narrow room with art books stacked on and around it. The left wall is on fire and through the right water comes into the room. I am mesmerized watching to see which; the the fire or the water, will reach the chair and the books first. 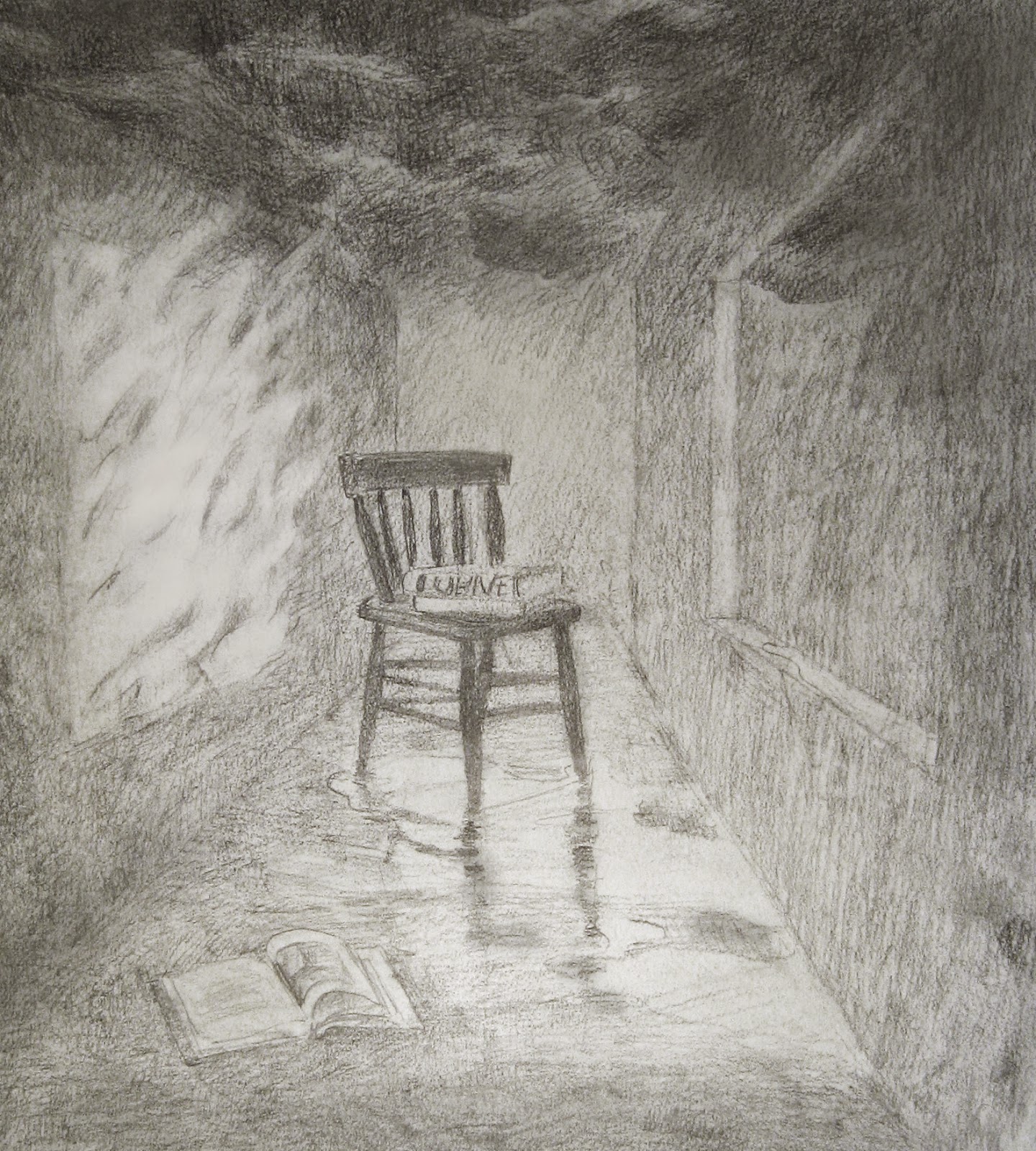 I drew it first as I remembered, getting all the essential elements. The feeling is there, although the scale seems off. 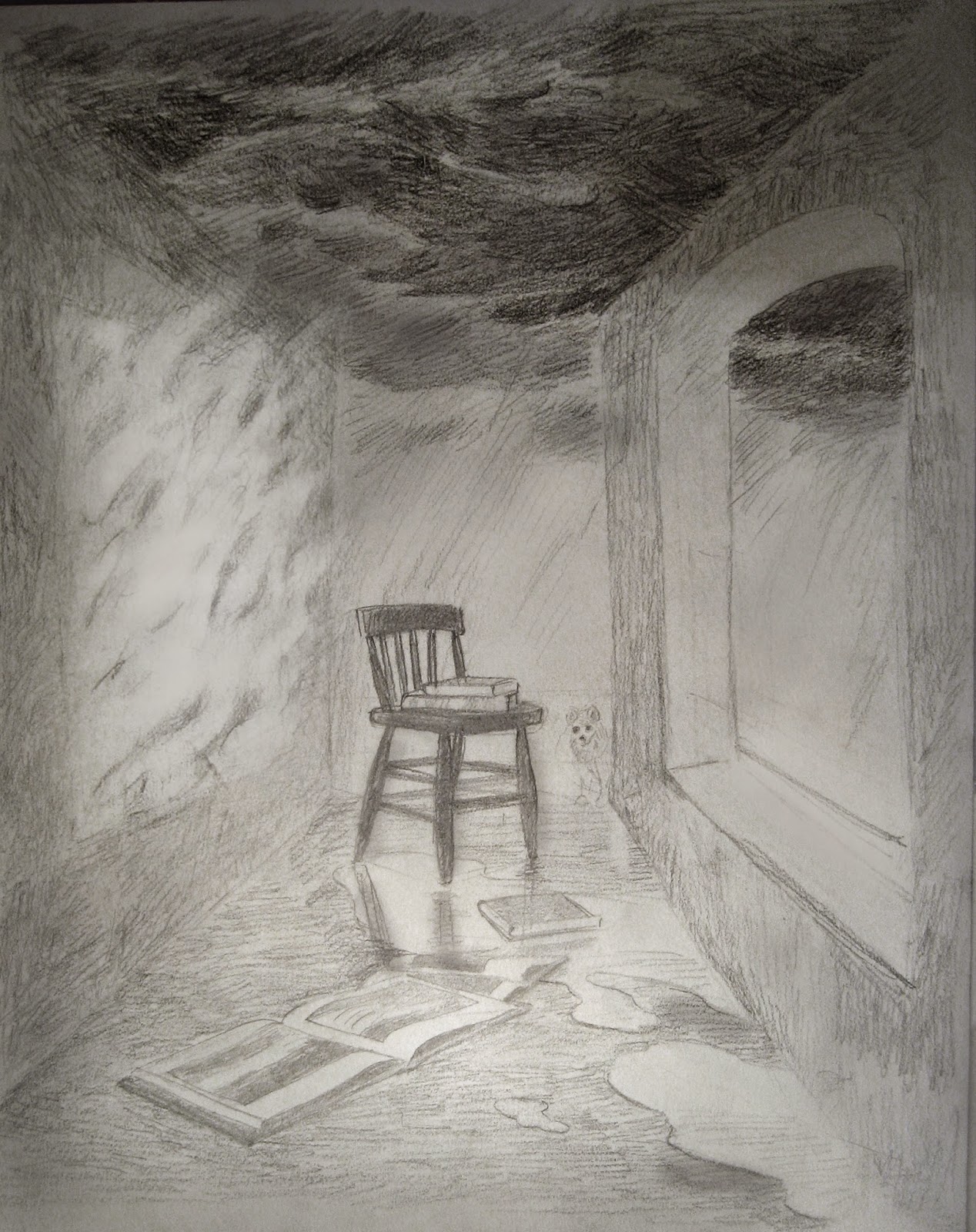 I allowed some distance in this sketch and still retained much of the feeling of the dream scene. While I like the openness and shape of the window on the right, the perspective is wrong. 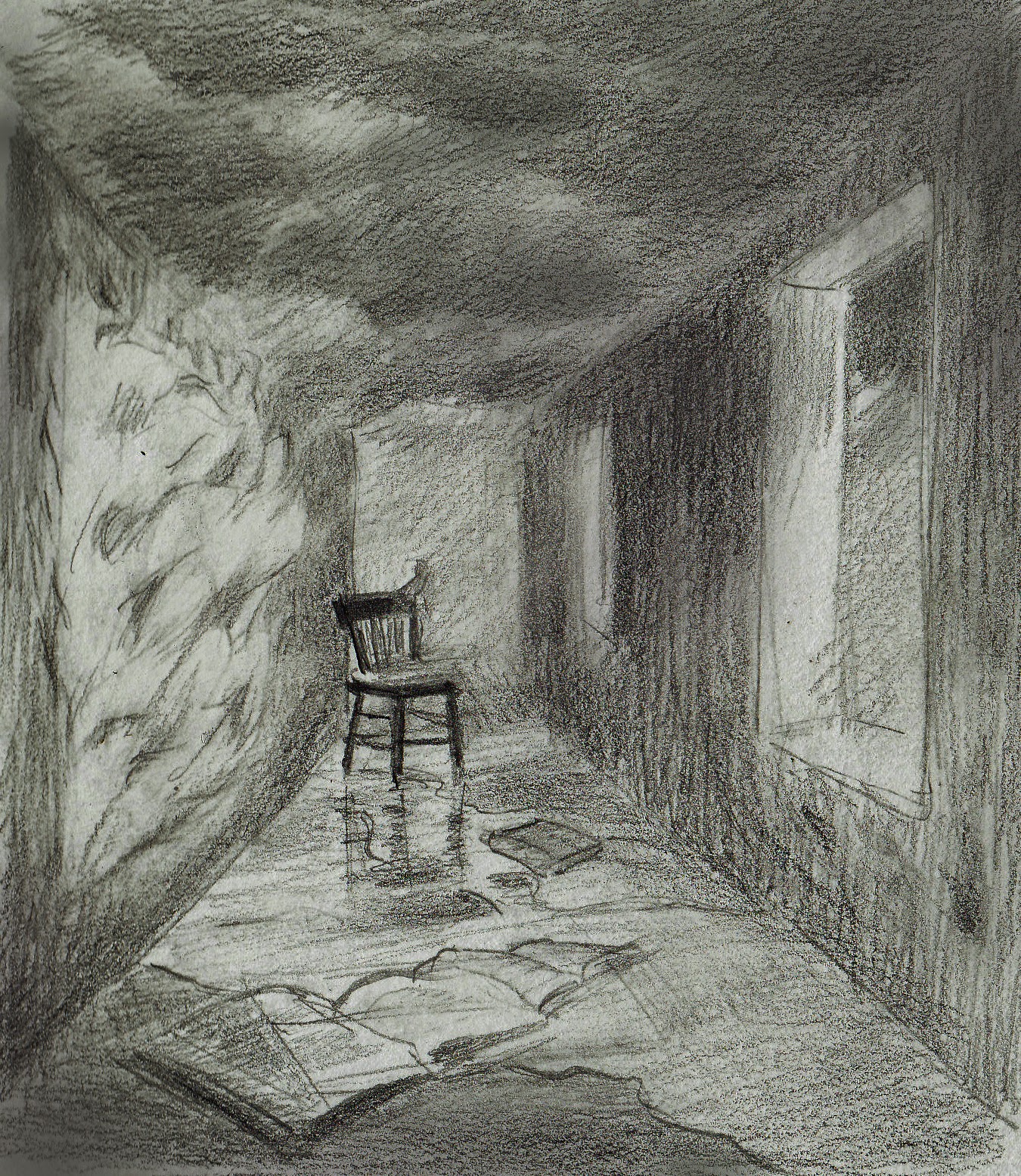 More distance and better perspective and the chair is far away. I begin to wonder if it wouldn't be more elegant to simplify. 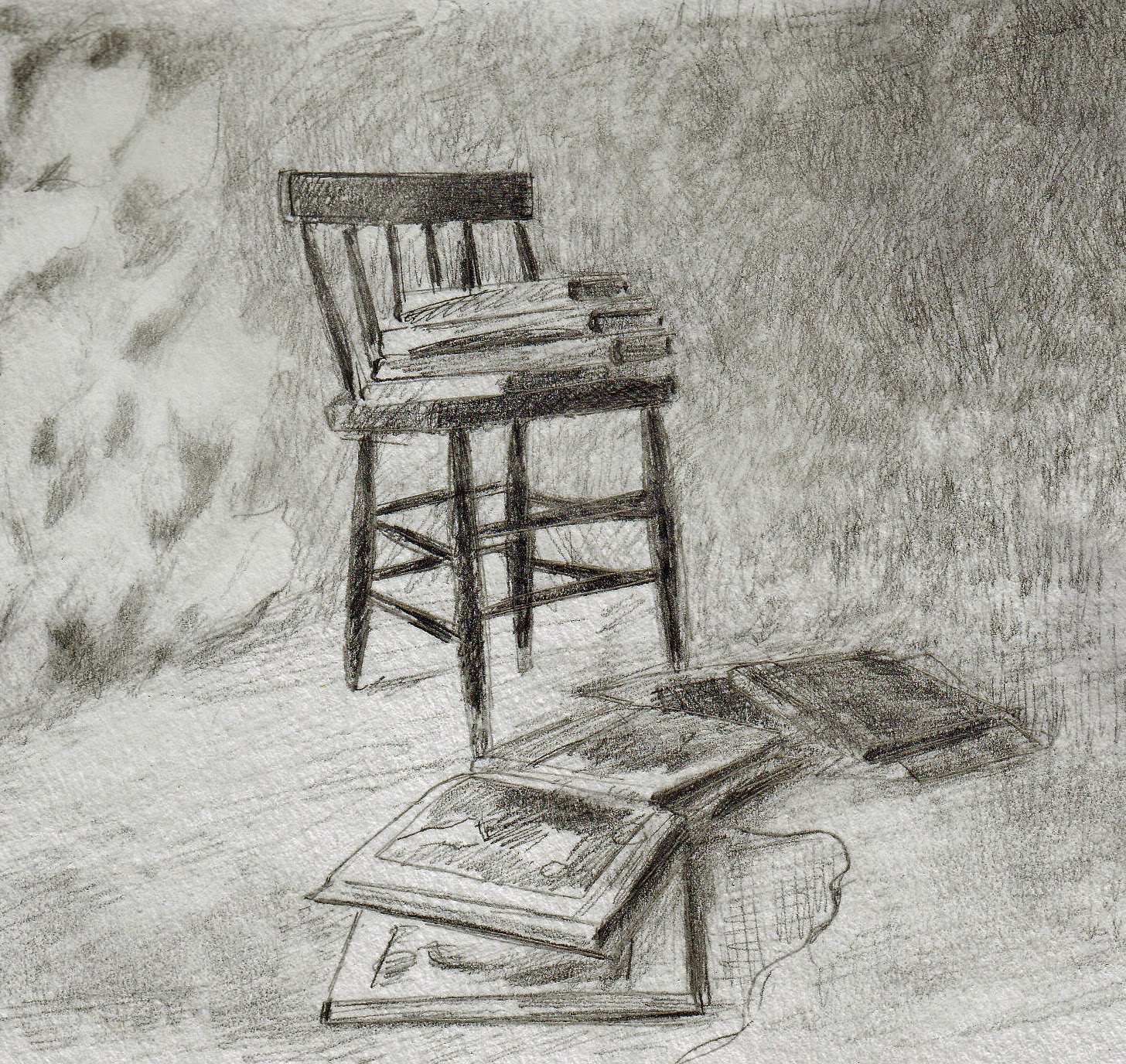 Better? I'm not sure if I'm satisfied with how the books are arranged. They seem to lead the eye in a semi-circle and out of frame. Also, this way it is more of a still life instead of an interior landscape.
I'll likely do both, but in the meantime another sketch or two, or ten, is on order.

Animals On My Mind 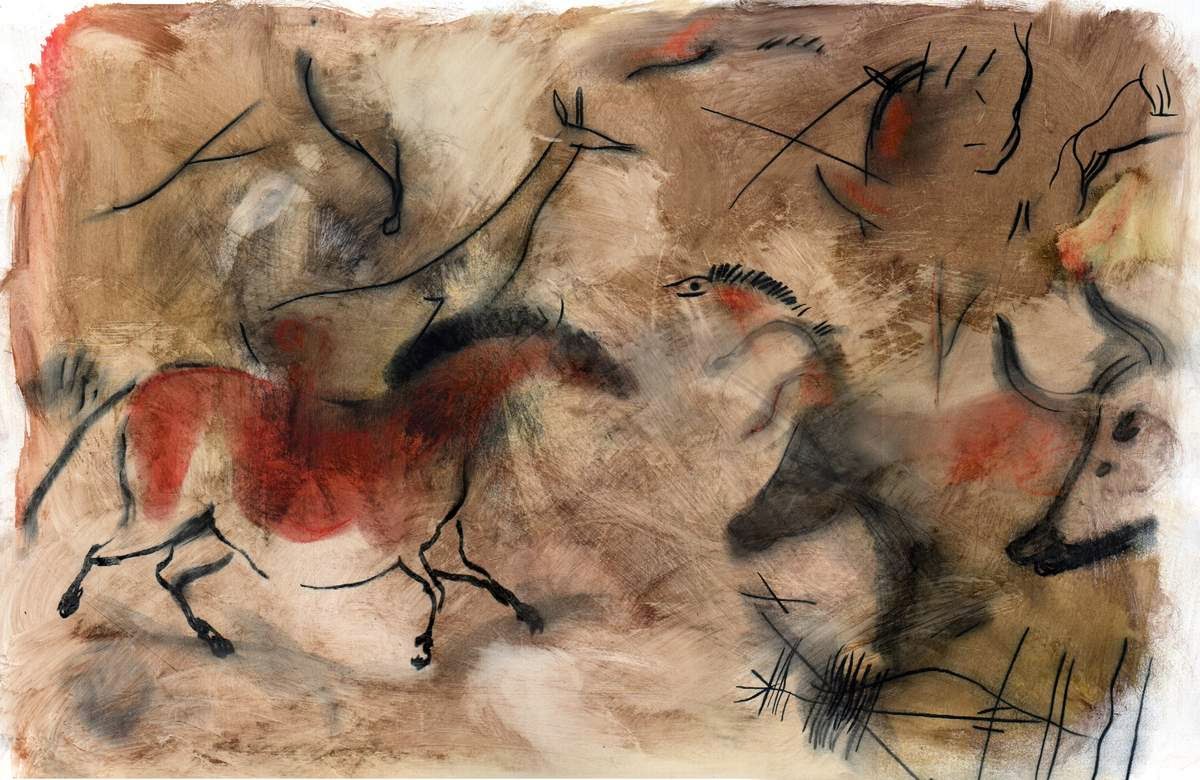 Animal have had a place in art for as long as there has been art. From the paleolithic artwork of the Caves of Lascaux to contemporary depictions, animals have long been part of human culture, myth, and symbol.

What do animals mean to our psyche? Many earth based cultures consider animals as spiritual counterparts, as messengers, and as partners in life on earth. Jung stated that animals were a relevant symbol of our psyche and often  represented the self.


Theriomorphism: the ascription of animal characteristics to humans.


There seems to be a resurgence of animal imagery in contemporary art. One theory for this is that we are compensating through art for a loss. As humans grow more urban our involvement with non human animals becomes increasingly rare. With the exception of those animals doomed to be commodities; as food, as pets, and used for entertainment - which could include animal sanctuaries and parks, as well as zoos - natural encounters with animals, wild or tame, are few and far between. The occasional encounter with deer becomes an almost magical moment, and happening across a coyote, bobcat, or bear, or even a wild turkey or goose, often causes fear or confusion.


Anthropomorphism: the attribution of human characteristics or behavior to a god, animal, or object.

The questionable practice, in my opinion, of using live animals as art has unfortunately also surged. As I write this, an Ibizan Hound is part of an exhibition at LACMA. This practice to me is an extension of perceiving animals as commodities. None of those images appear here, or of taxidermy based art, as these are simply, to my mind, further forms of animal exploitation. The very same mind set that allows people to feel comfortable with exploiting animals, may also allow them to feel comfortable exploiting people.

Email ThisBlogThis!Share to TwitterShare to FacebookShare to Pinterest
Labels: Artists I Admire, awe, birds, natural phenomena, Pets and other animals

I'll have two pieces in this group exhibition of artists from the Pasadena Society of Artists taking place this month in Burbank at the Creative Arts Center.