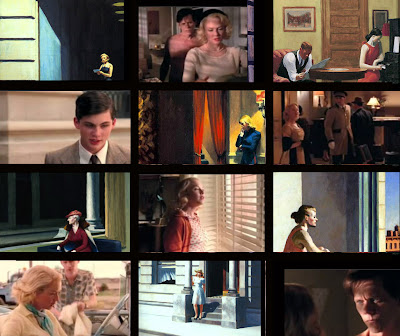 A game I sometimes play when I watch movies is to try to name what artists are called to mind by the design of the motion picture, by it’s setting in time, it's palette, it’s mood and general sense of place. Recently while watching My One and Only I was reminded of the artwork of Edward Hopper.

The elements shown in the trailer below from My One and Only that strongly remind me of Hopper are the interior lighting, the green golds and reds against darks and pale blue, the geometric elements provided by the lighting and the architecture - especially the way windows are used, as well as the way the actors are placed within the scene in relationship to the background and to each other, and the oblique lines of sight - looking out of frame and away from each other that emphasizes their separateness or sense of isolation.

Hopper's influence on motion picture design is well known. During a Hopper Exhibit at the Tate Modern, filmmaker Todd Haynes, whose own film, Far From Heaven draws from Hopper, pulled together a showing of films referencing Hopper's influence specifically. Here is the list of the films shown:

This article from Errata, Celluloid Hopper, goes into this in depth as well as mentioning a film or two that were not a part of the exhibit.
at February 23, 2010 8 comments:

Email ThisBlogThis!Share to TwitterShare to FacebookShare to Pinterest
Labels: Art and Film, Just For Fun, Something to Think About 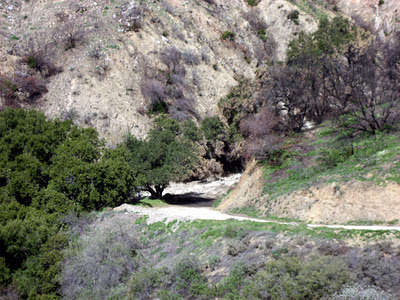 We had almost unbearably beautiful weather after all the storms this weekend and I was treated to a walk along the edge of the Angeles National Forest. It was warm, but not too hot. Wildflowers were beginning to bloom. I saw poppies and lupines and although there are places along the edge of the mountains where the devastation from fire and mud is readily apparent, if you look the other direction everything looks normal. 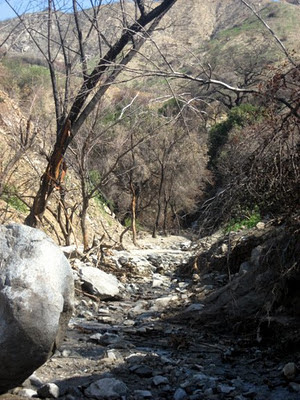 I don’t know at exactly what point our walking took us out of Tujunga and into the Forest. I think the trail we were on goes in and out of the Angeles Forest. I didn’t see any signs or markers; on the other hand I wasn’t paying much attention to that. Although I remember after the fires that it was announced that the Forest was closed, a couple of months ago the openings of the roads running through the forest were announced, although subject to closure on stormy days. In my mind this meant that the Forest was also open. How do you close a forest while the roads running through it are open? Just as we reached the Haines Canyon junction three very shiny dirt bikes crested the trail ahead and came toward us. We stepped aside to make room for them to pass and one came to a stop right in front of us. That was when we saw the sheriff’s insignia the rider was wearing. Ah, so then we are informed that the Forest is indeed closed, don’t you know. We take a peek at the Haines Canyon Debris Basin and head back the way we came. I wonder in hindsight, do they really take those bikes down the rocky embankments and ford the stream? 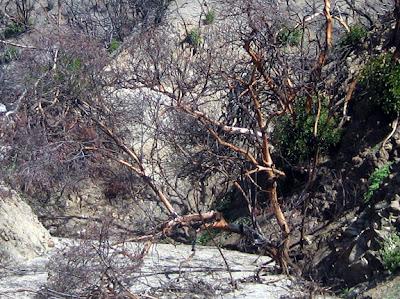 I almost never put people in my landscape paintings. In this case I may. Maybe because I decided to do this painting during New Year's morning spent with friends on this beach, the people feel to me like they are a part of the landscape. In addition they take up so little space, serving more to give scale to the sky.

I've done several variations in sketch form while I try to decide whether or not to include the lifegaurd shack and the telephone pole in the image. I'm still unsure. Sometimes I think they add something and sometimes I don't. I may have to do two paintings before I find out.
at February 09, 2010 8 comments:

As mentioned in a recent post, I've begun to think about titling artwork. Unfortunately this thinking too often occurs to me just as I've uploaded an image and realize I need to call it something and at the very least something that's different than what I've named the last 3 or 4 paintings.

There are a lot of different opinions on what titles should be. I tend to like titles that add something to the meaning and I appreciate if it can be descriptive. I found a few interesting articles representing various viewpoints and methods of titling that I'll share with you here:

From "Subjective: The Artful Life": Titling Artwork: Part 1 Part 2 and Part 3 . I found this three part series of articles to be among the most thoughtful and in depth on the subject.


How to Title Your Work: Seven Steps
A wikiHow article that guides you through a titling process.


Robert Genn discusses painting titles in one of The Painter's Keys articles.


The painting above is making a return appearance on this blog as it is having it's final retouches complete. The title came from a little searching I did into weather sayings and their meanings.


Related Post:
Trace in the sky the painter's brush, the winds around you soon will rush.
at February 02, 2010 10 comments: