The Cranes of San Miguel

Last week I went to San Miguel de Allende with a group of friends. We arrived on a Saturday night that happened to coincide with a Cuban festival involving music and fireworks. Whenever the fireworks would explode white cranes would take off into the sky and glide overhead - feathers illuminated from the firework's glow. In the morning we could see that they nest in the trees above the Bed and Breakfast. My guess is that they get food from a nearby lake. As far as I can see they don't seem to reside in any other location within San Miguel de Allende. 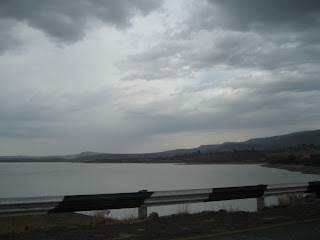 We drove past this lake on the way to Gunajuato. Probably it's the lake that the cranes get their food from.
at March 23, 2009