After wavering on the idea - like many I dislike crowds and lines and traffic - and wondered what work would I want to put into a show so anonymous and so crowded? I decided to at least try to install a small piece of artwork in the Chain Letter Los Angeles edition at Shoshana Wayne Gallery at Bergamot Station. I also had the privelege of installing on behalf of two artists who could not be there in person that day, yet reserving the option of bailing out if it was too much.

Experience has taught me to avoid Michigan Avenue when traveling to Bergamot on any day that there might be an unusually large crowd, so I parked north of Olympic in a paid structure and walked a block and a half. Fortunately the three artworks I carried were very small. I arrived shortly after 10 am to see a line that ran from the gallery door east, then south, and then west alomg the perimeters of the complex. I took my place at the end behind a man with a dog named Pete (or maybe the man's name was Pete and the dog's name was Buddy) and started filling in the submission forms for the artwork using my Kindle as a writing surface. The sun came out from behind the morning haze all too soon, so I opened my umbrella for shade. 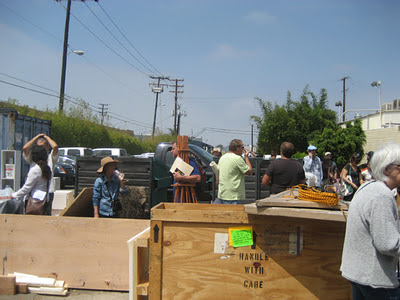 The line kept slowly moving, friends and acquaintances arrived and took their places in line both behind and ahead. Information circulated and by 11:15 or so we learned that the gallery was full. I was surprised. I'd read on the Chain Letter Facebook page that the stacking of artwork might occur and I was picturing a vast pile of work, so how could it be a pile already? They opened a second space, a smaller space, perhaps we would be in that space so we waited. Some people bailed out. I stayed, the man with the dog named Pete stayed, the woman ahead of us who had lived in Ohio stayed. We muttered to each other that we must be diehards. The line inched forward. The man with the dog went for a sandwhich and water for his dog and returned. Information came around about a third space opening and we were getting closer to the head of the line. When I finally got there the woman at the desk said "Thank you for waiting" which made me laugh. She numbered my submission forms and gave me three corresponding numbered yellow stickers for the art and told me to install in D2 since the work was small. The larger pieces were being sent to the third space in F1. My work is number 761. It was 1:15 pm when I left. Almost a thousand more pieces were installed after. 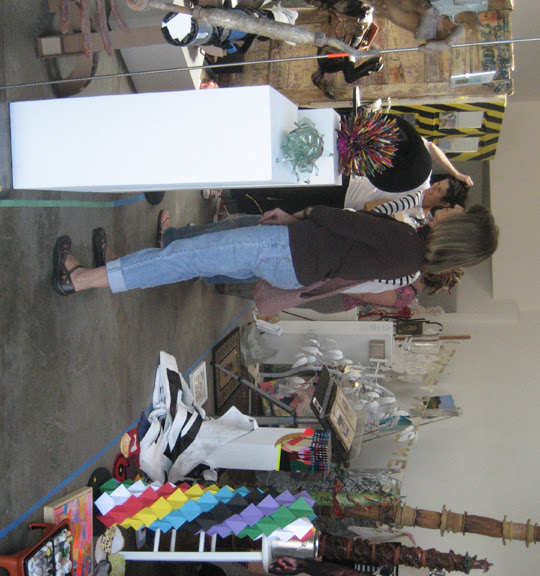 Many people documented the process, links below.

Email ThisBlogThis!Share to TwitterShare to FacebookShare to Pinterest
Labels: Just For Fun, My Work on Exhibit