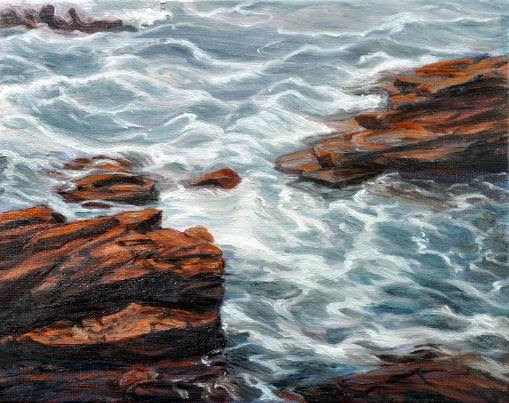 Here is the final, more or less, of the Maine tide and rock study.The overall color of the rocks hasn't really changed much from the initial lay in- for those who were concerned about that.

Earler this week I spent the end of an afternoon with a friend at El Matador Beach. We've had a series of storms in Southern California after a spell of almost summery weather. The plan was to catch the end of a storm breaking up, or the beginning of another gathering strength just at sunset. El Matador has wonderful rock formations scattered about and the low angle of the sun with clouds would have added to the drama. However, even though it was dark and ominous up here in the foothills, by the time we got to the coast﻿, though windy and cold, it was bright and sunny. It was beautiful that way too of course and at that time of day the colors of the rocks, the sand, and the water kept changing. Well worth the visit. There will be other opportunities to catch stormy conditions coming up, or so I hear.
at February 19, 2011

I love this painting!
I've never been to El Matador, I'll have to go sometime.

Thank you Melissa! I think you'd like El Matador.