A View of Halema`uma`u Ash Plume 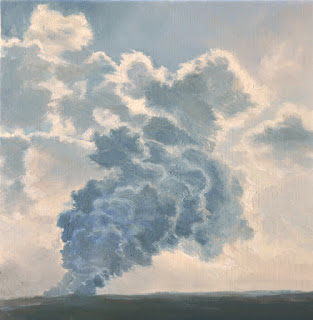 Here is the newest work in progress, another inspired by a trip to Hawaii last fall. This vent emitting gases and ash formed about a year ago in the crater of Kilauea at Volcanoes National Park. I am told that it used to be that when visiting the park you could walk in the crater up to the edge of the volcano. The fact that this fumarole - which is a fancy name for ash plume - has formed is a sign of activity, so you can see why excursions across the crater are no longer allowed. When the plume is mostly white there isn't much ash present, just gases. The ash would make the plume more dingy and brown.

After visiting the crater we went to explore the lava tube. Inside the lava tube - not the tourist one with lights and signs that remind you to watch your step, but the other one - the one with a gate and a sign that said something like "You are free to enter at your own peril". In this lava tube I learned the importance of a good flashlight with fresh batteries.

This painting is fairly small and I'm curious to see if in the final work the scale of the actual eruption will come across.
at May 14, 2009

I love the texture visible in the enlarged version. Very beautiful.

What happened when the batteries ran down?

Thanks Jean! I wonder how much of that texture will hold up through the layers of paint to come.

I was walking through the tube with a group of people, so the light of other's flashlights helped for awhile. As my light got dimmer and dimmer I walked slower and slower. When I heard someone up ahead call out "Watch out for the drop off!" I stopped altogether. One other person who did not have a flashlight and didn't want to keep going offered to turn back with me. We slowly inched our way back in the dark clinging to each other while trying to avoid tripping over obstacles or banging our heads on the low places of the ceiling.

This story is actually scarier than what I imagined, which was that your flashlight went out and you had to wait--not long--for someone to come along with light. I didn't have a mental picture of the tube.