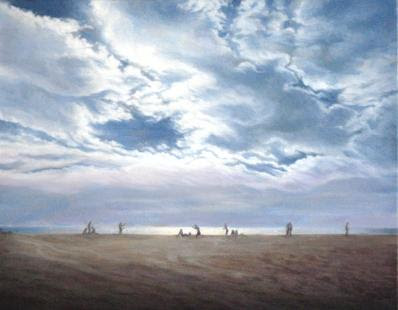 In a switch on their typical role as a retailer, Bloomingdale's has been buying artwork for display in their new store opening in Santa Monica at the end of the week.

The selection of work for this new collection was made using a "blind jury" process. Bloomindale's went to Crussell Fine Arts and an open call to artists was announced. Over 300 artists responded with over 1000 images, out of which a final 17 pieces were chosen - the identities of the artists were not revealed until the very end of the process. I'm happy to say that the painting above, First Day, is one of the pieces selected.

I remember how helpful reader comments and feedback were while I was working on this painting - your encouragement makes all the difference - thanks!
at August 03, 2010

Email ThisBlogThis!Share to TwitterShare to FacebookShare to Pinterest
Labels: My Work on Exhibit, Sold

My compliments! Both to you and to Bloomies.

flowers of my mind said...

Congratulations! It is a beautiful painting. All the Best!

Thanks Claudia, thanks Jean!

That's awesome, Katherine! I'm not a bit surprised, I just LOVE this painting. They're lucky to get it.

Katherine, well done, this is fantastic!

Many congrats Katherine! As others have said, a beautiful painting - I adore (and now miss) the coast, as I grew up by the North Sea.

Birthday card on the way.

Derek - thank you. The coast can be very magnetic - how lucky you are to get to grow up there!

Welcome and thanks Birdman! Come back soon.

I loved this painting so am doubly glad to hear of your great news. Congrats!

Dianne, Gabrielle - thanks so much!