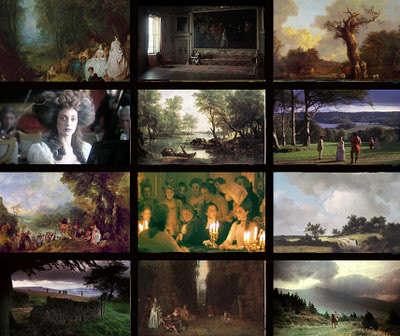 Another example of a film heavily influenced by fine art is Stanley Kubrick's Barry Lyndon. In this case the film takes inspiration from 18th century paintings, particularly the landscapes of Watteau and Gainsborough.

From Kubrick on Barry Lyndon, An interview with Michel Ciment, Kubrick had this to say, “On Barry Lyndon, I accumulated a very large picture file of drawings and paintings taken from art books. These pictures served as the reference for everything we needed to make -- clothes, furniture, hand props, architecture, vehicles, etc. Unfortunately, the pictures would have been too awkward to use while they were still in the books, and I'm afraid we finally had very guiltily to tear up a lot of beautiful art books. They were all, fortunately, still in print which made it seem a little less sinful. Good research is an absolute necessity and I enjoy doing it.”

Gainsborough made his living painting commissioned portraits, however his favorite subjects were landscapes, which he painted for pleasure. Watteau's work was influenced by theatre and ballet, and seemed to depict idyllic charm tinged with a feeling of melancholy. Both artists had a sense of independence and individuality in their work and lives.

The film was shot in England, Ireland, and Prussia. Interior scenes were lit and shot by candlelight which required a special lens, adding to the diffused, painterly, feathered edges look of 18th century paintings. The cinematographer, John Alcott and the art directors, Ken Adams and Roy Walker won Oscars for their work.

Four Seasons in a Life said...

I discovered your blog through Dianne Poinski, whom I just featured on my blog.

As for your post, I find your series most interesting. I have always looked towards classical paintings to learn about lighting my table top sets when I was a commercial photographer.

Besides Barry Lyndon, a film in which one scene was lite by a single candle requiring a special lens from NASA, the is Polanski's Tess, another film relying on paintings.

I would also add another film, The Pearl about Vermeer, that made use of many scenes to look like individual Flemish paintings. Sadly the film lacked script and acting, but was a visual treasure.

There are of course many more we can both name, but the first two have had an influence on many more films that followed.

Thank you for sharing.

Wishing you a wonderful day,
Egmont

Thanks for stopping by. You're right, Tess is a great example - visually very beautiful. I had forgotten about it.

So far I haven't counted The Pearl and other films based on the life of an artist because the subject matter makes the influence seem inescapable. In the same way, I'm on the fence about including Moulin Rouge. It isn't about Lautrec, but he appears in the film - albeit in a fictional way.