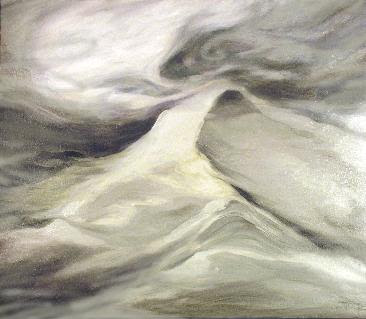 Recently someone asked for permission to use an image of one of my paintings. I’m always flattered when someone likes my artwork enough to want to use it in some way. An image is usually requested for book or magazine covers and for websites, although once I received a request for permission to use a painting for a snowboard design. Once the snowboards were manufactured I'd receive a royalty on the sales. After some thought I turned it down. At the time I just couldn’t visualize it, but now I think it might have been kind of cool. These days I generally only grant requests accompanied by compensation – or at the very least an exchange that somehow acknowleges the work that goes into the making of an image. That could be free advertising space or a promotional article. This most recent request to use the painting above was granted free of charge after determining that it was not for profit and that it was for a student. I’ll be credited, and the use is quite limited – only four copies in all. I’m grateful that permission was even requested and not just taken. After all, I might never have known.


I've been giving some thought to posting some guidelines for image use that I can direct people requesting images to and just what I might include as criteria. Perhaps a fee schedule with a smaller fee for charities or causes that I support. I might include a limit to the number of images used and that permission must be granted for use. I might stipulate that the images cannot be altered in any way or used to create derivative works and that where an image is used that I am credited with the year and copyright symbol included, as well as a link back to my website if the image is used on the internet.

How do you handle image requests? Do you feel inclined to say yes or no?
Related Posts:
Cover Art
More Cover Art
at November 24, 2009

i have turned down a few requests to use my mural images. i figured those paintings were created especially for my sister and it wasn't right. but i really like your ideas of stipulation for use.it's definitely a good idea to think this out before hand so you don't regret any decisions.

I buy images for clients and while usually they are royalty-free, occasionally they are fine art or photography from an artist that I know. I love it when I can obtain a great image for a client while also supporting an artist friend.

Hi Katherine, What a timely post. I was asked a few days ago about using one of my paintings for ceramic tiles in exchange for royalties on each sale. I'm still on the fence about it. The thought of the image being diluted by mass reproduction doesn't appeal to me. However, I am still a stuggling artist and a few extra dollars sounds pretty good to me right now. What to do?

It's nice to know that people are asking for images, isn't it?

It does feel good to connect clients and friends - everybody wins!

It's good to weigh all your options. To me in those decisions much depends on how the image will be used, how many times, where, and by whom. Ceramic tiles could be very nice! I think developing an income stream, such as income from royalties, can be a great idea for an artist. Maybe you can designate some paintings to be reproduced in this way while holding others in reserve.

Good luck with whatever you decide.

Thanks for the feedback, Katherine. I appreciate your time. Will let you know what happens.